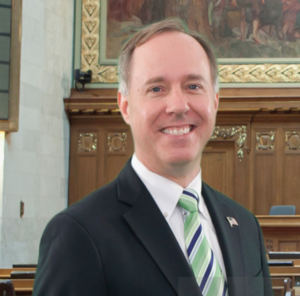 Speaker of the Wisconsin State Assembly

Robin J. Vos has served as the Speaker of the Wisconsin State Assembly since 2013. Vos, a Republican, has been a member of the legislature since 2004. The 63rd Assembly District, which Vos Represents, includes Racine and the "communities of Rochester, Burlington, Town of Burlington, Yorkville, Dover, Union Grove, Mount Pleasant, Sturtevant." Vos has served on the following committees: Committee on Finance (Chair), Committee on Audit, Joint Committee on Finance (Co-Chair), Joint Legislative Audit Committee, Joint Committee on Employment Relations, Joint Legislative Council.[1][2] He has been called the "most powerful Republican in [the Wisconsin] state government."[3]

While enrolled at the University of Wisconsin – Whitewater, Vos was appointed a student representative on the UW Board of Regents by Tommy Thompson. His college roommate was Reince Priebus. Vos then worked for State Reps Jim Ladwig and Bonnie Ladwig as well as U.S. Rep. Mark Neumann. Vos owns Rojos Popcorn and RJV Car Wash[3][4] Vos was a "key player" in the passage of Gov. Scott Walker's Act 10 bill. As the former WI Chairman of the American Legislative Exchange Council (ALEC), Vos helped "push an ALEC-sponsored voter ID law through the Assembly."[3]

According to One Wisconsin Now, "Vos is wielding his power to protect his special interest patrons and to stand in the way of progress for the people of Wisconsin on the issues that are important to them."[4]

Vos was reelected most recently in November 2018.[3]

Vos was accused of building a costly “shadow government” to take on the Evers administration by Assembly Minority Leader Gordon Hintz of Oshkosh after hired he three former Scott Walker officials to his staff and increased his Chief of Staff salary to $120,000[5] Reportedly, the total compensation for Vos’ newly expanded personal staff will exceed $1 million a year.[6]

Threats to Overhaul the Nonpartisan Government Accountability Board

Common Cause of Wisconsin, which played a key role in the creation of the nonpartisan Government Accountability Board, which oversees campaigns, elections, lobbying and ethics and is run by a nonpartisan board of retired judges, alerted its members in November 2014 to plans by Speaker Robin Vos and Senate Majority Leader Scott Fitzgerald to "reform" the board in 2014. While Vos at that time had only spoken about wanting to replace the board's members, on December 15, 2014 he told Wisconsin Public Radio that he was "open" to making the GAB a partisan institution, which Fitzgerald had previously advocated.

Common Cause recounts why the nonpartisan board was formulated in 2007 with broad bipartisan support and signed into law under Democratic Governor Jim Doyle:

"[T]he Wisconsin Government Accountability Board was created as a non-partisan and independent state agency in 2007 to oversee the state's election, campaign finance, lobbying and ethics laws.

"Vos was elected to the Assembly in 2004, two years after the Legislative Caucus Scandal had erupted and brought down the top Democratic State Senate and Republican Assembly leaders (including Assistant Majority Leader Bonnie Ladwig who preceded Vos and had been his boss). That scandal was the impetus behind the creation of the G.A.B. because the State Elections Board and the State Ethics Board had utterly failed to investigate and uncover the unfolding corruption that was occurring under the Capitol dome for years before five top Democratic and Republican legislative leaders were criminally charged with felony and misdemeanor misconduct in public office in 2002.

"Retiring State Senator Mike Ellis (R-Neenah) devised the idea of establishing a non-partisan and independent agency to oversee elections, campaign finance, lobbying and ethics in the wake of the Caucus Scandal and CC/WI worked closely with him and other legislators to construct the legislation which passed with the votes of every Republican legislator in a Special Session in early 2007, including the vote of Vos and of State Senate Majority Leader Scott Fitzgerald (R-Juneau) who has also said he wants to dismantle the G.A.B."[8]

"The GAB judges are not in charge, and that has to change," Vos told Wisconsin newspapers in 2014.

Vos and Fitzgerald started talking about overhauling the elections board in the wake of the "John Doe" criminal investigation of potentially illegal campaign coordination between out-of-state dark money groups and the Walker campaign, which the Center for Media and Democracy has reported on at length. (See Scott Walker). Both legislative leaders have also discussed reforming the John Doe process itself.

Wisconsin Common Cause Director Jay Heck has pointed to the John Doe investigation as the cause for the sudden proposal to overhaul the GAB. "The stated rational by Vos and Fitzgerald is that the GAB is not responsive," Heck told CMD in December 2014, "but the real reason they want to eviscerate the GAB is because it signed off on the John Doe II investigation in 2012 to examine possible illegal coordination between Walker's campaign and outside groups such as Wisconsin Club for Growth."

"It turns out that legislative leaders want absolute power and don't like non-partisan, independent entities making decisions the leaders haven't approved of first," Heck said in a newsletter.[8] 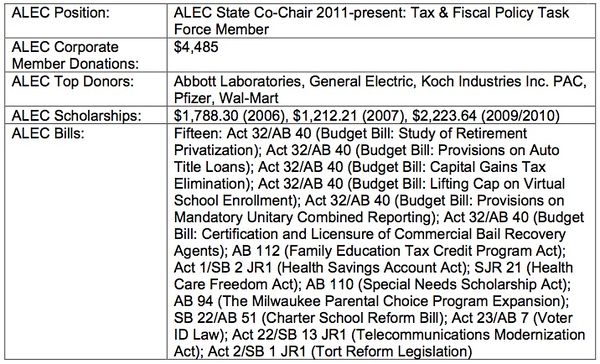 Rep. Robin Vos was the co-chair of the Wisconsin Joint Finance Committee, along with Sen. Alberta Darling. He was also an ALEC State Co-Chair along with Rep. Scott Suder and Koch lobbyist Amy Boyer. In the middle of critical budget discussions in May 2011, Vos stopped all discussion of the budget to take up a non-budgetary matter: a Voter ID bill. Proponents said the bill was needed to prevent voter fraud, a statistically non-existent problem in the state of Wisconsin. Opponents said the bill’s restrictions on qualifying IDs threatened to disenfranchise hundreds of thousands of American citizens in Wisconsin, including college students and other Democratic constituencies. ALEC passed a “model” voter ID bill in 2009. Looming Senate recalls scheduled for August of 2011 and the threatened recall of the governor in 2012 may have been the impetus for this emergency action. But with two ALEC members at the helm, Vos and Darling, the bill was rushed through on a 12-2 party-line vote and signed by the governor a short time later. The bill has subsequently been struck down as a violation of the Wisconsin Constitution’s guarantee of the right to vote.

Rep. Vos and Sen. Joe Leibham also introduced SJR 21, the “Health Care Freedom Amendment,” in March 2011. The resolution would change the Wisconsin Constitution to prohibit the implementation of the 2010 federal health reform bill, the Patient Protection and Affordable Health Care Act, by barring the mandatory purchase of health insurance and could also bar single-payer health care in the state. The resolution is modeled on an ALEC bill of the same name. According to ALEC, the Health Care Freedom Amendment has been introduced in 44 states.[10]

Vos is the Wisconsin State Chairman of the American Legislative Exchange Council (ALEC), as of 2011.[11] He is also a legislative member of ALEC's Tax and Fiscal Policy Task Force. In the 2011-2012 legislative session, Rep. Vos co-authored 9 bills that reflect ALEC models, according to an analysis by the Center for Media and Democracy.

On his 2011 Statement of Economic Interest, filed for the calendar year 2010, Vos listed ALEC as the payer, but only noted “reimbursement of expenses” with no amount listed.