Dr Robin Batterham is a director of MBD Energy, a small unlisted Australian company which specialises in what it refers to as "Bio Carbon Capture and Storage" technology which aim to commercially convert power station flue gases to algae which in turn yield oil and animal feed. Since 2010 he has served as Kernot Professor of Engineering at the University of Melbourne.[1] 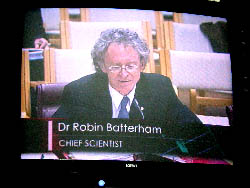 In May 1999 Australian Prime Minister John Howard appointed Batterham to the position of Chief Scientist, to work two days a week advising him on issues, including energy policy. For the remainder of the work week he worked as Managing Director of Research and Technological Development for Rio Tinto. Batterham resigned as Chief Scientist in 2006.

In August 2004, the majority of the members of the Australian Senate Employment, Workplace Relations and Education Committee found that the "potential and apparent conflicts of interest which arise from Dr Batterham's dual part-time roles are as damaging to the Office of the Chief Scientist as any real conflict of interest."

"They erode public confidence in the political and administrative process and call into question the integrity of high level scientific advice provided to Government. The public interest is not being served as long as the perception of a conflict of interest remains and is not properly managed," the committee found. The majority of the committee members recommended that the position be made a full time appointment.

Senator Trish Crossin tabled the report on behalf of the Chair of the Employment, Workplace Relations and Education References Committee, Senator Kim Carr. "The committee considered the allegations of conflict of interest raised by the Australian Greens. It finds that there is a clear conflict of public and private duties arising from the dual part-time roles performed by Dr Batterham. The circumstances of Dr Batterham's part-time appointment fall squarely within any mainstream definition of conflict of interest," she told the Senate. [1]

Australian Greens Senator, Bob Brown, who pressed for the inquiry welcomed the committee report. "We are in an age where there is enormous concern about global warming. We are in an age where government has a big role in stimulating technology and research about ways forward that get us off the global warming treadmill and the position of the world's worst per capita polluter amongst industrialised nations," he told the Senate. [[2]

Brown told the Senate that during Batterham's term as Chief Scientist, which commenced in 1999, the government had cut back funding for renewable energy but provided "some $340 million in direct, indirect or enhancing grants" for Rio Tinto.

"When you look at the other side of the ledger … you find that the well of funding for the sunrise industries for environmental technology--which are based on renewable energy serving the whole of Australia and on energy efficiency --is basically dry.

"We have seen this extraordinary conjunction of the billowing of government largesse directly and indirectly to a huge company like Rio Tinto, whose chief technologist is Dr Batterham, at the same time as Dr Batterham has been the Chief Scientist for the government--whose role is to advise the government on the way forward. This gives the appearance of a conflict of interest," he said.

The report was dismissed by the Australian Government's Science Minister, Peter McGauran. "The Report serves only to confirm that there is no actual conflict arising from the part-time appointment of the Chief Scientist," he said in a media release. [3]