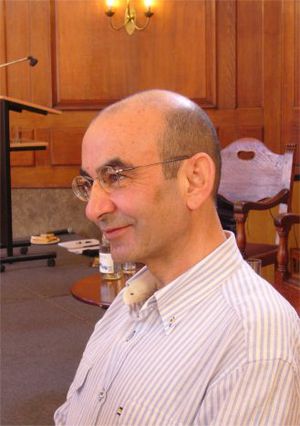 Raja Shehadeh (b. 1951) is a Palestinian human rights lawyer, activist and writer who lives in Ramallah, in the Palestinian occupied territories. He graduated in 1973 with a degree in English literature and philosophy from the American University of Beirut; studied law in London and was called to the English Bar at Lincoln's Inn in 1976. Mr. Shehadeh has practiced law in Ramallah since 1978. In 1979, he co-founded the pioneering human rights organisation Al-Haq, the Palestinian affiliate of the International Commission of Jurists which he co-directed until 1991. In the course of his legal practice, he handled and participated in a number of precedent-setting cases including the recent request to the International Court of Justice at The Hague regarding the Legal Consequences of the Construction of a Wall in the Occupied Palestinian Territories.

Mr. Shehadeh also wrote several books on the legal aspects of the Israeli occupation of Palestinian Territories including: