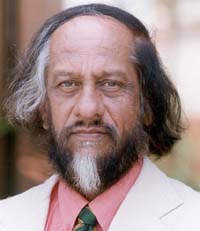 Rajendra K. Pachauri is the Director General of The Energy and Resources Institute (TERI) and the Chairman of the Intergovernmental Panel on Climate Change.

A biographical note states that was appointed as a Director of TERI in 1982 and then as Director-General in April 2001. "TERI does original research and provides knowledge in the areas of energy, environment, forestry, biotechnology, and the conservation of natural resources to governments, institutions, and corporate organizations worldwide," his biographical note states.[1]

In April 2002, Pachauri was elected the Chairman of the Intergovernmental Panel on Climate Change, a position to which he was re-elected in September 2008.[1]

The IPCC shared the 2007 Nobel Peace Prize with former U.S. Vice President Al Gore,who had earlier criticised Pachauri when he was first elected in 2002.[2] In its press release, the Nobel Prize Committee said the award was for "their efforts to build up and disseminate greater knowledge about man-made climate change, and to lay the foundations for the measures that are needed to counteract such change."

On December 11, 2007, Pachauri (representing the recipient IPCC) began his acceptance speech by drawing attention to his conviction that the Hindu philosophy of Vasudhaiva Kutumbakam, which means the whole universe is one family, must dominate global efforts to protect the global commons.[3]

Returning to this theme throughout his speech, he pointedly reminded his audience of the words of the president of the Maldives in 1987:

"...a mean sea level rise of two meters would suffice to virtually submerge the entire country of 1,190 small islands, most of which barely rise two meters above sea level. That would be the death of a nation."[3]

Pachauri repeatedly emphasized his concerns regarding the implications of climate change for the world's poorest nations, referring to studies that:

"...have raised the threat of dramatic population migration, conflict, and war over water and other resources, as well as a realignment of power among nations. Some also highlight the possibility of rising tensions between rich and poor nations, health problems caused particularly by water shortages and crop failures...

Support for a Low Carbon Target

While the bulk of the negotiations for a replacement agreement to the Kyoto Protocol has revolved around a greenhouse gas emissions target of 450 parts per million or higher, the Alliance of Small Island States (AOSIS) has argued for a target of 350 parts per million or lower. In August 2009 Pachauri told Agence France Presse, when asked whether he supported the AOSIS target, that "as chairman of the Intergovernmental Panel on Climate Change [IPCC], I cannot take a position because we do not make recommendations. But as a human being I am fully supportive of that goal. What is happening, and what is likely to happen, convinces me that the world must be really ambitious and very determined at moving toward a 350 target," he said.[4]

"Now people—including some scientists—see the seriousness of the impacts of climate change, and the fact that things are going to get substantially worse than what we had anticipated," he said. He also stated that he was disappointed with the progress in the talks so far. "It is certainly a source of disappointment. But I don’t feel pessimistic. I think all of this will, hopefully, lead to a culmination in Copenhagen that all of us feel reasonably satisfied with," he said.[4]

A biographical note states that Pachauri began his career "with the Diesel Locomotive Works, Varanasi, where he held several managerial positions, Dr Pachauri joined the North Carolina State University in Raleigh, USA, where he obtained an MS in industrial engineering in 1972, a Ph.D. in industrial engineering and a Ph.D. in economics. He also served as Assistant Professor (August 1974-May 1975) and Visiting Faculty Member (Summer 1976 and 1977) in the Department of Economics and Business."[1]

Rajendra Pachauri innocent of financial misdealings but smears will continue "[1]"

Wikipedia also has an article on Rajendra Pachauri. This article may use content from the Wikipedia article under the terms of the GFDL.