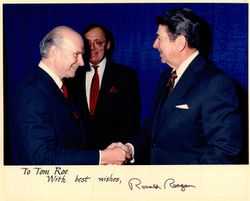 According to the National Review and SPN's website, SPN was founded at the suggestion of President Ronald Reagan. In a conversation with Thomas Roe (a member of his "kitchen cabinet") in the 1980s, Reagan allegedly suggested Roe create "something like a Heritage Foundation in each of the states." SPN was formally created as an "umbrella organization" to provide "advisory services" for the web of state-based Heritage-like groups -- bankrolled by Roe and other conservative funders -- in 1992.

From 1992 to 1998, SPN operated in a relatively limited organizational capacity. Then, according to SPN, "SPN's Board of Directors realized the need for a stronger organization that would provide additional services. After extensive discussions, the existing Board took a bold and historic step in September 1998, dissolving itself and appointing a transitional Board to fulfill the broader role envisioned for the organization." SPN has continued to grow at a rapid rate, expanding from 43 member state think tanks in 2002 to 64 member state think tanks in 2013.

Please see the SourceWatch article on SPN Founders, History, and Staff for more.