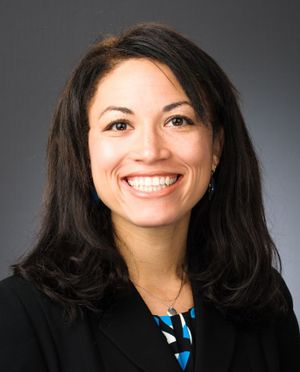 “Schwinn served as Assistant Secretary for the Delaware Department of Education, and before that as Assistant Superintendent of Performance Management for the Sacramento City Unified School District. Schwinn is also the founder of Capitol Collegiate Academy in Sacramento, one of the highest performing charter schools serving low-income students in the state.[1]

“In between her time in the classroom and her district leadership roles, Schwinn worked in the private sector for a multi-billion dollar company where she supervised work in the operations, marketing and information departments. But she could never fully step away from education and was at one point elected to the Sacramento County Board of Education.[1]

“As an assistant superintendent in the Sacramento public school system, Schwinn developed the Guide to Success, the county’s first districtwide accountability system. In addition, she created the first school choice calculator in the county, ran the Principal Development Program, and managed the Assessment, Research and Evaluation Department. As a principal investigator, Schwinn also helped to lead the Sacramento Pathways initiative, a collaborative with higher education institutions to ensure students complete college after high school graduation.[1]

“As the Associate Secretary of Education in Delaware, she led multiple departments geared towards improving the quality of information provided to schools, including the statewide Offices of Assessment, Performance Management, School Turnaround, Accountability, and Data Management.” She then served as Deputy Commissioner of Academics at the Texas Education Agency, where she was “responsible for the Assessment & Accountability Division, as well as Standards & Programs.”[1]

Schwinn was one of three finalists for the position of Massachusetts Education Commissioner in 2017-2018, but was not chosen for the job.[2] She was an alumnus of the Broad Academy in 2015-2016.[3]

Schwinn is a proponent of charter schools and school choice, speaking on the latter at the 2013 conference of the Charter School Association of California to thank other charter school leaders who helped her campaign for school board. In her speech, she urged charter advocates to run for office, and discussed her own “push for choice” since joining the school board.[4]

The website Great Schools, an organization that provides information about educational opportunities, scores Capitol Collegiate Academy’s academics at a five out of ten. Student proficiency in math and English fall below California state averages. Additionally, Great Schools scored Capitol Collegiate Academy’s academic progress, or how much the school helped its students improve from one year to the next, at a four out of ten.[6]

A reviewer on Google wrote that the school needed improvement. She claimed that “essentially all of the teachers have had less than five years of experience,” and that if a student had or needed “any special academic instructions be prepare[d] to be extremely disappointed.”[8]

In late 2017, Schwinn was embroiled in controversy surrounding Texas’ no-bid contract in dealing with special education. As deputy commissioner of academics in Texas, Schwinn oversaw TEA’s policies on testing and academic programs, including those for children requiring special education. Schwinn “spearheaded a no-bid contract with a Georgia-based company last year to mine data from thousands of students receiving special education services and to help create a long-term plan to help kids with disabilities.” Advocates protested the plan, and the contract was terminated in December 2017 after the TEA had spent $2.2 million for services rendered.[9]

Around the same time, a federal report was released finding that Texas had effectively capped the number of students with disabilities who were eligible to receive services, leading Governor Greg Abbott to demand TEA come out with a plan to reform special education. Schwinn was being considered for a position in Massachusetts during the controversy.[9]

According to a blog post by Exceptional Delaware, Schwinn caused controversy soon after accepting a position with the Delaware State Board of Education in 2014. Exceptional Delaware wrote that at a board meeting during a discussion about crime and violence affecting students, Schwinn said the issue wasn’t “necessarily a hurdle to overcome.” Soon after, Schwinn embarked on a Priority Schools agenda that planned to hire new leaders and fire half of the staffs of the schools, causing teachers, parents, and advocates to protest. Additionally, the state DOE’s funding for the plan was not what was initially promised, and the Secretary of Education, Mark Murphy, resigned shortly after.[10]

Kevin Ohlandt, author of the blog, told WBUR that Schwinn had served in six major education roles in three states in the prior ten years, saying that “the fact that she’s moving around the country is very much a concern, because it shows that she kind of comes into a place, causes problems and then leaves.”[11]