Paul Snover is a Colorado Tea Party supporter who, just prior to the 2010 mid-term elections, in October 2010, painted a racist, homophobic billboard in Grand Junction, Colorado, that depicted President Obama in four ways: as a Muslim terrorist wearing a turban and a dynamite vest, as sombrero-wearing Mexican, a gangster and a homosexual. Snover claimed he painted the board on behalf of a third party who sought to remain anonymous. The board was denounced by the leaders of both the Republican and Democratic Parties in Mesa County, Colorado, where the board was located. The board was taken down less than two weeks after it went up.

The board drew national attention. A local Tea Party group had reportedly planned to hold a rally around the billboard, but it was taken down before they got to hold the event. After the board was put up, both the anonymous backer and Snover reportedly received death threats and hate mail. [1][2][3][4][5]

No matter what polls and politicians say, the Constitution has been thrown in the trash and burned by our very own government and We The People watched TV while America burned! The enemy is not at the gate, it is a cancer within our own borders. From what I have learned of history and what I see going on in ALL levels of government, I can but conclude that there is no Constitutional Republic any more, only a sick tyrannical twisted dictatorship. Prove me wrong please! Welcome to the Twilight Zone. Your old paradigm is over and a new one is afoot![6] 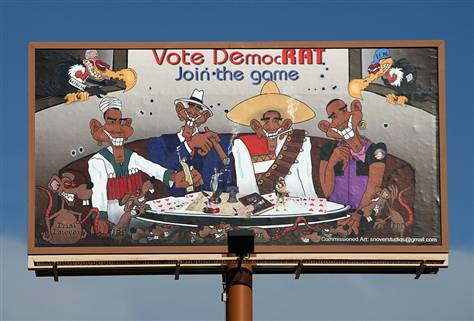