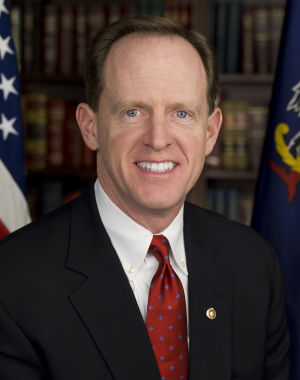 Patrick Joseph Toomey is a Republican United States Senator from Pennsylvania. Before his election to the Senate in 2010, Toomey served as the Representative for Pennsylvania's 15th Congressional District and was the President of Club for Growth from 2005-2009. He is running for reelection in 2016 against Democratic challenger Kathleen McGinty.

In 2013, Toomey was one of 18 Senators who voted against the bill to reopen the government during the United States government shutdown of 2013. The high-stakes partisan brinksmanship brought the nation to the brink of default and was widely criticized by major American businesses. Standard & Poor’s estimated that the shut down took at least $24 billion out of the United States economy.[1] The agency lowered its estimate for GDP growth to close to 2 percent from 3 percent. Club for Growth and the Kochs' political fundraising network - both of whom have been linked to Toomey throughout his political career - opposed bipartisan compromise which would have ended the shutdown.[2]

Pat Toomey is running against Democrat Kathleen McGinty for reelection to the U.S. Senate. According to the Cook Political Report, Pennsylvania's 2016 Senate race is expected to be one of seven "toss up" contests in the November 2016 election.[3] Similar to his 2010 campaign, Toomey is running on a message of jobs, fiscal responsibility, and small government.[4][5] However, in his 2016 campaign Toomey has focused much of his attention on issues of public safety, including background checks for gun purchases, defending police from criticism, combating the opioid addiction crisis, and ending the immigration policies of "sanctuary cities."[5]

On April 26, 2016 Club for Growth Action paid $520,600.00 to produce an advertisement targeting Pat Toomey's opponent Kathleen McGinty.[8] The advertisement is entitled "Revolving Door," and it features an actress portraying McGinty walking back and forth through a revolving door meant to symbolize her transitioning between lobbyist and state official. The narrator discusses McGinty's past ethics scandals and her support for tax increases, ending by stating that she "has no shame."

Freedom Partners Action Fund - the Super PAC of the Koch-affiliated Freedom Partners Chamber of Commerce - announced a $3 million ad buy for the Pennsylvania Senate race on May 26, 2016.[10] The advertisement is entitled "Whose Job," and it claims that "McGinty, while serving as Secretary of the Pennsylvania Department of Environmental Protection, helped steer millions of dollars in subsidies to favored groups and companies—and then left Pennsylvania taxpayers out to dry."

On August 1, 2016 Freedom Partners Action Fund announced a $1.3 million ad buy in opposition to Kathleen McGinty.[11] The ad is called "Favored Few," and the narrator claims that McGinty helped corporations "navigate government and land big contracts" in exchange for "board positions, a six-figure salary, and campaign cash."

The Kochs' Americans for Prosperity