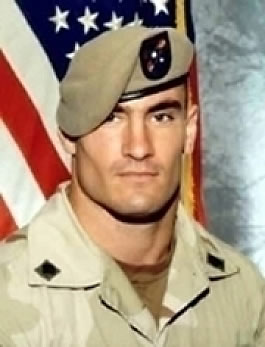 Pat Tillman was "the Arizona Cardinals defensive back who famously volunteered for the Army in the spring after 9/11, giving up a $3.6 million N.F.L. contract extension. Tillman wanted to pay something back to his country by pursuing the enemy that actually attacked it, Osama bin Laden and Al Qaeda," Frank Rich wrote in the November 6, 2005, New York Times. "Instead he was sent to fight a war in Iraq that he didn't see coming when he enlisted because the administration was still hatching it in secret. Only on a second tour of duty was he finally sent into Taliban strongholds in Afghanistan, where, on April 22, 2004, he was killed.

On April 30, an official Army press release announcing his Silver Star citation filled in vivid details of his last battle. Tillman, it said, was storming a hill to take out the enemy, even as he 'personally provided suppressive fire with an M-249 Squad Automatic Weapon machine gun.'"

However, Rich wrote, "It would be a compelling story, if only it were true. Five weeks after Tillman's death, the Army acknowledged abruptly, without providing details, that he had 'probably' died from friendly fire."

On March 4th, 2006, the Pentagon's Inspector General announced that after review, further investigation of Pat Tillman's death would be necessary to decide whether members in Tillman's unit should be charged with negligent homicide. [1]