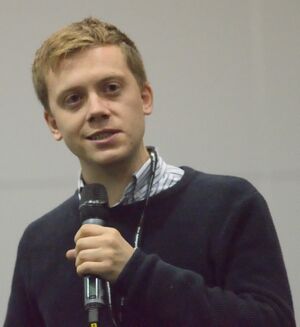 Owen Jones (August 8, 1984)[1] is an author and columnist at The Guardian.[2] He contributed to The Independent between 2012 and 2014.[3][4] In a 2013 interview, Jones self-described as a "democratic socialist", saying "I want a society based on people’s social needs, not in the interests of private property. I want to extend democracy to every part of life."[5]

Calls for Private Education to be Abolished

In a September 2019 opinion piece, Jones argued that the U.K. Labour Party should attempt to abolish private schools. Jones wished to discontinue what he saw as "The segregation of children by the bank balances of their parents"[6] and argued that private education embodied the unspoken "'one rule for us, and one rule for everybody else'" motto of the U.K. class system.[6]

He also interviewed Farhana Yamin, a climate change lawyer, who compared peaceful resistance to "ringing the fire alarm really loudly everywhere, so that everyone could hear."[7] and said "We don't say put out the fire alarm, we say let's put out the fire."[7] She also argued that direct action resulting in arrests was more effective for her personally than writing a report, giving a lecture, or giving a briefing to politicians, all of which she felt would just be ignored.

Jones ended the segment by claiming, "For me, what has to be emphasized is the issue is capitalism. It is a system which is rapacious, which exploits both human beings and nature, where you have a constant attempt to amass wealth for a tiny elite no matter what the cost for the world as a whole. Civil disobedience works. Direct action works. Other movements should learn from that and build on it and show, that if you take to the streets, and use peaceful disobedience, then the powerful and the media are forced to listen."[7]

In a March 2019 opinion piece, Jones noted the different way stories portrayed the inspiration for Islamic terrorism versus right-wing terrorism. "The internet, hate preachers... and the western-armed, extremism-exporting state of Saudi Arabia: all play their part in radicalising the impressionable. When it comes to the far right, however, this consensus is absent [because] the hate preachers, recruiting sergeants and useful idiots of rightwing extremism are located in the heart of the British, European and American establishments."[8] Jones criticized the persistent use of the phrase "Cultural Marxism" in mainstream U.K. media, noting its rightwing origins, and criticized many outlets for reporting on misleading and inflammatory stories about Muslims and minimizing concerns of Islamophobia. Jones concluded by stating "too many of those working in the British press act as hatemongers who play with matches then express horror as the flames reach ever higher"[8] and accused mainstream media outlets of "directly assisting the rise of the far right".[8]

In August 2019, Jones was assaulted by three men outside a London pub while celebrating his 35th birthday. Jones strongly believed it to be a "politically motived [sic] premeditated attack” and claimed the attack was the result of “the rise of an emboldened far right, which is increasingly violent, and targeting minorities and people on the left."[9] Metropolitan police subsequently arrested the men.[10]

Criticism of the U.K. Media

In an April 2018 interview, Jones discussed a controversy-stirring tweet, where he wrote: “The main thing I’ve learned from working in the British media is that much of it is a cult. Afflicted by a suffocating groupthink, intolerant of critics, hounds internal dissenters, full of people who made it because of connections and/or personal background rather than merit.”[11]

In the interview, Jones claimed the UK media does not take the political left and working people seriously, saying "... unless you're a social Darwinian, who believes that the most privileged people in society are the best and the brightest... the media is completely unrepresentative of British society, both in terms of being socially exclusive and in being politically exclusive."[12]

Jones also commented on the ways the political left in Britain is delegitimized by the media, saying "the left now is treated as an irrational, delusional; dangerous, potentially, cult of people" and noting that "the age-old way of approaching people on the left who are unapologetic and strident about their political opinions is that they are unhinged cranks... we've seen that applied to any left-wing figure with any significant platform and it is a way of policing the acceptable boundaries of political debate." Jones claimed, according to the commentariat, there is the "grown-up, sensible, sane view of the world" and within this system, "we're all colleagues, we have to be collegiate and partly have the same worldview, the same suffocating groupthink, and anyone who deviates from that is seen as completely delusional or basically unhinged, mentally."[12]