"The powerful thing about MoveOn is that it is not a one-way broadcast media. The Internet, when used best, is a two-way media."--Joan Blades, MoveOn founder. [1]

"They're the leading edge. They've combined the reach and the cost-effectiveness of the Internet with real live, on-the-street and in-the-office, face-to-face volunteerism." - Michael Kieschnick, president of Working Assets [2] 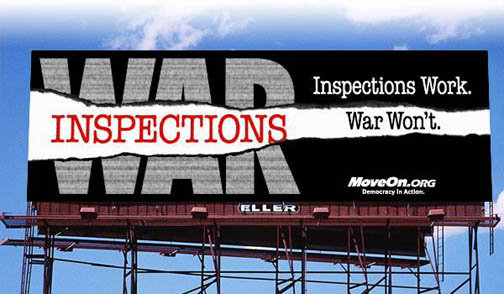 A MoveOn billboard opposing the war in Iraq.

MoveOn uses e-mail as its main conduit for communicating with members, sending action alerts at least once a week. According to Joan Neils, a graduate of the University of Washington who has completed an analysis of MoveOn, one of the keys to its effectiveness has been its status as a "trusted, credible entity." It achieves this status through a variety of strategies: "First of all, people who read a MoveOn e-mail or visit the site generally do so after receiving the message or link from someone they trust. ... This is because almost every e-mail MoveOn sends encourages recipients to forward it on to others who share an interest in the topic. This is how they build their membership and it provides a foundation of trust among the recruited." In addition, "Every e-mail includes * the opportunity for a recipient to unsubscribe from the list. This is in stark contrast to commercial e-mails and spam, which often (and irritatingly) exclude this minor but important option." MoveOn also respects the privacy of its members and doesn't sell or share individuals' information with other groups. Finally, Neils writes, "Most fundament to credibility is MoveOn's legitimacy through validation. All of the supporting information MoveOn provides via e-mail and the Web is easily validated. For instance, e-mails always cite sources at the bottom, most often complete with links directly to the source." [3]

The MoveOn website also uses multi-media, including videos, audio downloads and images. In addition communicating via the Internet, MoveOn advertises using traditional print and broadcast media as well as billboards, bus signs and bumper stickers, digital versions of which are downloadable from its website. "MoveOn also uses the Web effectively for two-way communications," observes Neils. "One of the most interactive elements of the MoveOn.org site, and one that demonstrates the group's nonhierarchical organization is the Action Forum. The Action Forum is much like a blog, in which members write in issues they think are important and suggest strategies for action. Members then vote on submissions and the highest ranked issues rise to the top, thereby establishing MoveOn's priorities. It's an incredibly fluid, bottom-up approach to decision-making, allowing MoveOn to adapt and change as they go." [4]

"The site is organized in ways traditional political consultants might not stomach," reported CNN in January 2004. "Any member can propose priorities and strategies to which others can respond, and the most-supported ideas rise to the top. That means ceding control over much of the content to motivated online participants, producing interactivity that adds grassroots credibility." [5]

"We are steeped in feedback," says MoveOn founder Wes Boyd. [6] The group's success, he argues, has stemmed from its ability to listen to supporters and develop campaigns that reflect their interests. "That doesn't mean you can't have a vision. Our model is 'Strong Vision, Big Ears,'" he said at the O'Reilly Network's 2004 Digital Democracy Teach-in. "Every time we did something that really engaged people the membership soared." [7]

"Part of MoveOn's attraction is that it aims for normal people, not just activists, and engages them successfully," says MoveOn organizer Eli Pariser. "The efforts fund themselves ... we're just trying to keep up. We ask for a specific amount of money and much more pours in." [8]

Some analysts see MoveOn as primarily a vehicle for mobilizing citizens who already share its liberal political views. According to Neils, however, "the group's largest potential for influencing politics is not necessarily through changing the positions, attitudes or behaviors of their primary audience. Instead, their efforts may be more substantially realized through reaching undecideds in an indirect way, via opinion leaders or 'Influentials.'" [9] She cites research by the Institute for Politics, Democracy & the Internet showing that "Online Political Citizens" (OPCs) like the people who visit MoveOn are "seven times more likely than average citizens to serve as opinion leaders among their friends, relatives and colleagues . . . Normally, 10% of Americans qualify as Influentials. Our study found that 69% of Online Political Citizens are Influentials." [10]

MoveOn's activities are not limited to Internet and media. From the beginning, it has sought to engage people in real-world activism. Although its petition opposing the impeachment of Bill Clinton collected signers over the Internet, more than 2,000 volunteers participated in hand-delivering the petitions to members of Congress - a strategy that it used again in organizing against the war in Iraq. In February 2003, journalist Scott Duke Harris observed that "MoveOn's long-term success ... may hinge on its ability to use the Net to change the way business has been done in the offline world. The group has challenged the notion, for instance, that only big contributors can get face-to-face meetings with policy makers. In recent weeks, it recruited members through online emails to form groups to meet with members of Congress. More than 400 meetings have taken place." [11] MoveOn has collaborated with groups like Meetup.com in organizing street demonstrations, bake sales, house parties and other opportunities for people to meet personally and act collectively in their own communities. According to Don Hazen, "MoveOn's most dramatic achievement was to turn its Internet machine - focused on petitions, emails to policy makers and raising and distributing money to political candidates - into face-to-face activism and grassroots media buying, the kind of activities that make politicians in this country sit up and take notice." [12]

Reasons for MoveOn's success, according to Hazen, have included the following:

MoveOn's fundraising success is also partly a reflection of changes in federal election laws. Under the terms of the McCain/Feingold election finance reform legislation, which went into effect in 2002, political parties were allowed to raise larger amounts of "hard money" contributions, but were forbidden from raising "soft money" -- a change that tended to favor Republicans, who have historically been more successful than Democrats at raising hard money. As a result, individuals seeking to influence the 2004 election have given money to non-party organization like MoveOn, which are still able to engage in political advertising using soft money under section 527 of U.S. tax code. "Thanks to 527s, we will be outspent by the Democrats," complained Ken Mehlman, manager of the Bush-Cheney campaign. "MoveOn.org is a huge threat and has hurt the president. Every action makes a difference." [14]