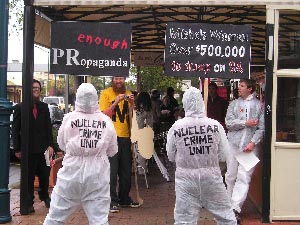 Michels Warren is an Adelaide-based PR company best known for its contract with the Australian government to promote the establishment of a national nuclear waste dump in South Australia. In June 2004 20 people protested outside the company's office over its role in promoting the dump.

Documents obtained under a Freedom of Information request revealed that in 2000 a list of experts had been compiled to help persuade the South Australian public, which is strongly opposed to the dump, to capitulate to the federal governments plans. The Freedom of Information documents revealed that some of the 'experts' had received media training organised by Michels Warren.

In October 2003, the Federal Science Minister, Peter McGauran, had told Parliament that his department had not developed such a list of experts or experts to help sell the dump proposal. He also denied the experts received media training by the company.

One of the tasks for the company was to blunt State government criticism of the proposal. But not everything went the way of Michels Warren and the federal government. In late June the Full Court of the Federal Court ruled that the compulsory acquisition of the dump site from the South Australian government was illegal. [1]