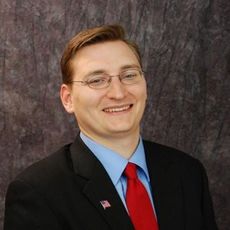 Michael Hough is the Resident Fellow on Public Safety at the American Legislative Exchange Council (ALEC), as well as the Maryland State Chair for ALEC, as of July 2011.[1][2]

To see a complete list of ALEC's staff, visit the the ALEC Staff page.

He is also a Republican member of the Maryland State Assembly who serves on the Judiciary Committee.[3]

According to the ALEC website, "[He] previously served as the legislative aide to Maryland State Sen. Alex X. Mooney. During his time working for Sen. Mooney, Michael assisted in passing legislation to establish an address confidentiality program for victims of domestic violence and legislation to update Maryland’s commercial code. Following high school, Michael entered the United States Air Force and served as a Minuteman III Missile technician; he was stationed at F.E. Warren Air Force Base in Cheyenne, Wyoming. In 2007, Michael graduated cum laude from Towson University with a degree in political science. His work has appeared in the Los Angeles Times and the Washington Times."[4] He is listed as a Finance, Insurance and Real Estate expert on the Heartland Institute's website.[5]