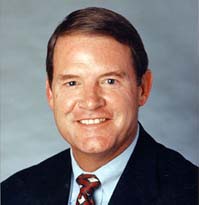 Michael G. Morris is the leader of the largest private sector consumer of coal in the United States.[1] Morris has been president, chief executive officer, and chairman of American Electric Power since 2004.[2]

Prior to joining AEP he was chairman, president and chief executive officer of Northeast Utilities System, beginning in 1997. Prior to joining Northeast Utilities, Morris was president and chief executive officer of Consumers Energy, the principal subsidiary of CMS Energy, and president of CMS Marketing, Services and Trading. Previously, Morris served as president of Colorado Interstate Gas Co. (CIG) and as executive vice president of marketing, transportation and gas supply for ANR Pipeline Co., both of which are subsidiaries of El Paso Energy. Morris also founded and served as president of ANR Gathering Co., one of the first gas marketing companies in the United States.[2]

Morris has served on the U.S. Department of Energy’s Electricity Advisory Board, the National Governors Association’s Task Force on Electricity Infrastructure, and the Connecticut Governor’s Council on Economic Competitiveness & Technology. He is a trustee of the Bushnell Overseers and the Board of Regents of Eastern Michigan University. He is also a director of St. Francis Care Inc., Nuclear Electric Insurance Limited, American Gas Association, Spinnaker Exploration, Flint Ink Corp., Webster Financial Corp. and Cincinnati Bell. He is second vice chair for the Edison Electric Institute, and past chairman of the Board of the Connecticut Business & Industry Association.

Morris graduated from Eastern Michigan University in 1973, then worked in the environmental department of Commonwealth Associates, where he prepared environmental impact statements for electric utility transmission lines, natural gas and oil pipelines and power plants.

In November, 20007, Morris told the Economist magazine: "No utility with any respect for its shareholders money would build a heavily polluting coal burning power plant in America these days; for fear that it would become a liability if the government moved to limit emissions of greenhouse gases." [4]

Citizen action and protest against AEP 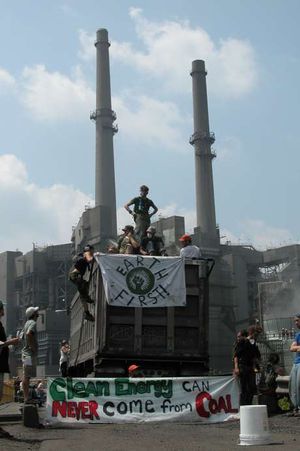 On July 10, 2006, 75 Earth First! and Rising Tide North America activists blockaded an access bridge leading to American Electric Power's coal-fired Clinch River Power Plant near Carbo, Virginia. Several people stretched a rope across the bridge and suspended themselves off the bridge's edge; others waved a coal truck onto the bridge, blockaded it, deflated its tires, and locked themselves to the truck. The protestors demanded that Clinch River and other outdated coal plants be shut down, and that mountaintop removal coal mining be ended. After several hours in which coal trucks were unable to get into the plant, police agreed to make no arrests if the activists would dismantle their blockades.[5][6]

In 2010, Abt Associates issued a study commissioned by the Clean Air Task Force, a nonprofit research and advocacy organization, quantifying the deaths and other health effects attributable to fine particle pollution from coal-fired power plants.[11] Fine particle pollution consists of a complex mixture of soot, heavy metals, sulfur dioxide, and nitrogen oxides. Among these particles, the most dangerous are those less than 2.5 microns in diameter, which are so tiny that they can evade the lung's natural defenses, enter the bloodstream, and be transported to vital organs. Impacts are especially severe among the elderly, children, and those with respiratory disease. The study found that over 13,000 deaths and tens of thousands of cases of chronic bronchitis, acute bronchitis, asthma, congestive heart failure, acute myocardial infarction, dysrhythmia, ischemic heart disease, chronic lung disease, and pneumonia each year are attributable to fine particle pollution from U.S. coal plant emissions. These deaths and illnesses are major examples of coal's external costs, i.e. uncompensated harms inflicted upon the public at large. Low-income and minority populations are disproportionately impacted as well, due to the tendency of companies to avoid locating power plants upwind of affluent communities. To monetize the health impact of fine particle pollution from each coal plant, Abt assigned a value of $7,300,000 to each 2010 mortality, based on a range of government and private studies. Valuations of illnesses ranged from $52 for an asthma episode to $440,000 for a case of chronic bronchitis.[12]