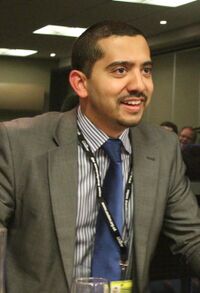 Mehdi Hasan (born 10 July 1979) is a British journalist, author, and podcast host. He regularly contributes to The Intercept,[1] Al Jazeera English,[2] and The Guardian,[3]

Mehdi Hasan began his career working for various British news outlets before becoming the senior politics editor at the New Statesman between 2009 and 2012.[4]

Before his current positions at Al Jazeera English and the Intercept, Hasan was the political director of Huffington Post UK[5]

Hasan's Head to Head series for Al Jazeera English consists of long-form interviews where Hasan delves into "the big issues of our time"[6] with guests such as former Blackwater CEO and founder Eric Prince, prominent atheist and biologist Richard Dawkins, former Kenyan Prime Minister Raila Odinga and many others. Topics discussed include, among others, economics, feminism, foreign policy, human rights, religion and terrorism.[7]

His Intercept-affiliated podcast, Deconstructed, first aired on March 23, 2018. Its self-described aim is to cut "through all the political drivel and media misinformation to give you a straight take on one big news story of the week."[9]

In a November 2018 tweet, Hasan shared a video of himself questioning Trump 2020 campaign adviser Steven Rodgers with the caption "Hey US media folks, here, I would argue immodestly, is how you interview a Trump supporter on Trump's lies:"[11] The video garnered immense popularity on Twitter, receiving over 185,000 "likes".

In a May 2013 piece, Hasan apologized for his past beliefs about homosexuality, saying "I’m a progressive who supports a secular society in which you don’t impose your faith on others... but I am also (to Richard Dawkins’s continuing disappointment) a believing Muslim. And, as a result, I really do struggle with this issue of homosexuality. As a supporter of secularism, I am willing to accept same-sex weddings in a state-sanctioned register office, on grounds of equity. As a believer in Islam, however, I insist that no mosque be forced to hold one against its wishes."[12]

Hasan's articles for The Intercept and The Guardian have discussed a wide variety of topics: from internal conflict within the Democratic Party to 2020 electoral politics to racism and xenophobia to criticism of the U.S.'s close relationship with Israel and Saudi Arabia.