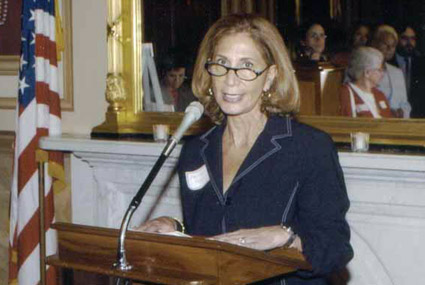 Mayada Logue was a Senior Regulatory Analyst at Philip Morris Management Corporation (PMMC) circa August 1995.[1] Prior to this position, she was Manager of Regulatory Affairs at PMMC in 1994, reporting to Anthony J. Andrade (Director of Wordwide Regulatory Affairs) at PMMC [2] and Scientific and Regulatory Affairs Analyst in 1993. She worked in PM's office in Richmond, Virginia.

In 1993, she reported to Ted Lattanzio, head of a newly created department at PM called "Worldwide Regulatory Affairs", (WRA) which was responsible for coordinating strategies and activities to try and slow the declining social acceptability of smoking on a worldwide basis.[3] She also attended Philip Morris's 1993 Environmental Tobacco Smoke World Conference in New York City at the Macklowe Hotel as a speaker, and presented a session about smoking lounges.[4]

By November 1996, Logue was a member of PM's "Ventilation Working Group," a task force that sought to promote to businesses the use of more expensive and powerful ventilation systems as part of a PM strategy to minimize the need for legislated smoking restrictions. [5]. Philip Morris Worldwide Regulatory Affairs Department and Ventilation Working Group were part of PM's effort to spread the company's Accommodation Program worldwide in an expansive effort try and preserve smoking in public places.[6]