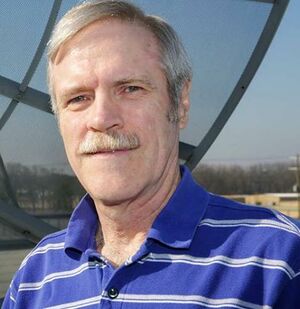 John R. Christy a professor of Atmospheric Science and Director of the Earth System Science Center of the University of Alabama in Huntsville (UAH), where he conducts research that is widely used to disregard the overwhelming scientific consensus that the climate is heading for catastrophe. Christy is a climate skeptic who oftentimes collaborates with Roy Spencer, another researcher at UAH. The pair collaborated on a dataset using satellite data that argued the troposphere was cooling, contrary to research showing surface and atmospheric temperatures were warming. The data was found to be faulty by Christy's peers. At the end of 2018, it was announced the Christy was joining the Trump administration's "Science Advisory Board."[1]

Christy and Spencer are both Southern Baptists, and Christy has made clear that his faith and his experience having done missionary work in Africa influence his beliefs regarding climate change. Both Spencer and Christy support the intelligent design movement, a fundamentalist Christian variant of creationism that claims intelligent design proves evolution to be false.

John Christy has an evangelical background, he served four years as a bi-vocational mission-pastor in Vermillion, South Dakota.

"John Christy and Roy Spencer of the University of Alabama published a series of papers starting about 1990 that implied the troposphere was warming at a much slower rate than the surface temperature record and climate models indicated..."; but the discrepancy turned out to be an artifact of their having applied incorrect adjustments to their UAH satellite temperature record data.[3], [4]. As Ray Pierrehumbert at RealClimate put it:

"Spencer and Christy sat by for most of a decade allowing — indeed encouraging — the use of their data set as an icon for global warming skeptics. They committed serial errors in the data analysis, but insisted they were right and models and thermometers were wrong. They did little or nothing to root out possible sources of errors, and left it to others to clean up the mess, as has now been done[5]"

A 2014 "Climate Change Talking Points" document authored by the Committee for a Constructive Tomorrow (CFACT) and acquired via an investigation by the Center for Media and Democracy cites Christy multiple times.[6]

“There is a lack of evidence to blame humans for an increase in extreme events. One cannot convict CO2 of causing any of these events, because they’ve happened in the past before CO2 levels rose. There are innumerable types of events that can be defined as extreme events — so for the enterprising individual (unencumbered by the scientific method), weather statistics can supply an unlimited, target-rich environment in which to discover a ‘useful’ extreme event.”

In a 2007 editorial in the Wall Street Journal, Christy wrote: "I see neither the developing catastrophe nor the smoking gun proving that human activity is to blame for most of the warming we see." [7]

"Christy was a contributing writer to "Global Warming and Other Eco-Myths," published by Competitive Enterprise Institute in 2002. He spoke at a June 1998 briefing for congressional staff and media, which was sponsored by the Cooler Heads Coalition."[2]

The website of the late Dr. Stephen Schneider delivers a potent analysis[8] of Dr. Christy's stances on the distinction between anthropogenic and natural climate change.

It may seem perplexing that Christy was a co-drafter of the 2003 American Geophysical Union position statement on climate change, which concludes that "Human activities are increasingly altering Earth's climate, and... natural influences alone cannot explain the rapid increase in surface temperatures observed during the second half of the 20th century."

But Christy noted that this statement "did not put forth a magnitude of the warming. We just said that human effects have a warming influence, and that's certainly true. There was nothing about disaster or catastrophe. In fact, I was very upset about the latest AGU statement [in 2007]." [9]

Wikipedia also has an article on John R. Christy. This article may use content from the Wikipedia article under the terms of the GFDL.