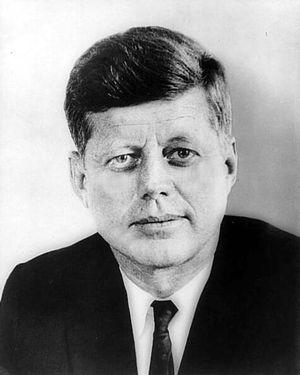 John Fitzgerald Kennedy (1917-1963) was the Thirty-Fifth President of the United States (1961-1963). Kennedy was the youngest ever elected to the presidency and the first of the Roman Catholic faith.

Of Irish descent, he was born in Brookline, Massachusetts, on May 29, 1917. Graduating from Harvard in 1940, he entered the Navy. In 1943, when his PT boat was rammed and sunk by a Japanese destroyer, Kennedy, despite grave injuries, led the survivors through perilous waters to safety.

Back from the war, he became a Democratic Congressman from the Boston area, advancing in 1953 to the Senate. He married Jacqueline Bouvier on September 12, 1953. In 1955, while recuperating from a back operation, he wrote Profiles in Courage, which won the Pulitzer Prize in history.

In 1956 Kennedy almost gained the Democratic nomination for Vice President, and four years later was a first-ballot nominee for President. Millions watched his television debates with the Republican candidate, Richard M. Nixon. Winning by a narrow margin in the popular vote, Kennedy became the first Roman Catholic President.

His Inaugural Address offered the memorable injunction: "Ask not what your country can do for you--ask what you can do for your country." As President, he set out to redeem his campaign pledge to get America moving again. His economic programs launched the country on its longest sustained expansion since World War II; before his death, he laid plans for a massive assault on persisting pockets of privation and poverty.

Responding to ever more urgent demands, he took vigorous action in the cause of equal rights, calling for new civil rights legislation. His vision of America extended to the quality of the national culture and the central role of the arts in a vital society.

He wished America to resume its old mission as the first nation dedicated to the revolution of human rights. With the Alliance for Progress and the Peace Corps, he brought American idealism to the aid of developing nations. But the hard reality of the Communist challenge remained.

Shortly after his inauguration, Kennedy permitted a band of Cuban exiles, already armed and trained, to invade their homeland. The attempt to overthrow the regime of Fidel Castro was a failure. Soon thereafter, the Soviet Union renewed its campaign against West Berlin. Kennedy replied by reinforcing the Berlin garrison and increasing the Nation's military strength, including new efforts in outer space. Confronted by this reaction, Moscow, after the erection of the Berlin Wall, relaxed its pressure in central Europe.

Instead, the Russians now sought to install nuclear missiles in Cuba. When this was discovered by air reconnaissance in October 1962, Kennedy imposed a quarantine on all offensive weapons bound for Cuba. While the world trembled on the brink of nuclear war, the Russians backed down and agreed to take the missiles away. The American response to the Cuban crisis evidently persuaded Moscow of the futility of nuclear blackmail.

Kennedy now contended that both sides had a vital interest in stopping the spread of nuclear weapons and slowing the arms race--a contention which led to the test ban treaty of 1963. The months after the Cuban crisis showed significant progress toward his goal of "a world of law and free choice, banishing the world of war and coercion." His administration thus saw the beginning of new hope for both the equal rights of Americans and the peace of the world.

Kennedy appointed Luther Terry, M.D. as Surgeon General in 1962. In 1964, Terry issued the first Surgeon General's report definitively linking smoking to disease. The impact of the report was historic.[1]