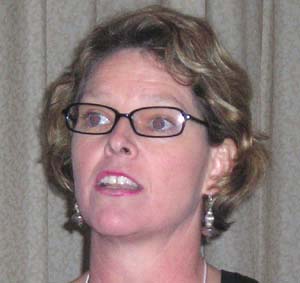 Dr Jennifer Marohasy was a Senior Fellow at the right-wing Australian think tank the Institute of Public Affairs (IPA) and a Director of its spin-off group, the Australian Environment Foundation. She commenced work with the IPA in approximately April 2003 as the Director of the Environment Unit which, a biographical note from that time stated, had "been established to provide market-based, science-driven solutions to environmental problems."[1] After two three-year contracts with the IPA, the last of which expired in June 30, 2009, Marohasy was not rehired.

In a post on her blog, Marohasy "I learnt a lot during the six years – especially early on with Andrew McIntyre teaching me how to write opinion (without reference to endnotes or footnotes) and Mike Nahan was always enthusiastic and supportive of my endeavours to understand the real state of the Murray River environment. I had great hopes for the planned collaboration between the IPA and University of Queensland on evidence-based environmentalism but the University proved too timid and conservative – at least for me," she wrote.[2] She made no mention in her blog of the current IPA Director, John Roskam.

The IPA does not publicly disclose which companies fund its operations.

Her biographical note on the IPA website described her as "a 'global warming sceptic'" and goes on to state that she "considers scepticism important for the progress of science."[3]

According to a 2003 biographical note she grew up on a cattle station in the Northern Territory then attended school in Brisbane. "After completing a science degree at the University of Queensland she worked for many years as a field biologist in remote parts of Africa and Madagascar. During the 1990s Jennifer published in international and Australian scientific journals. In 1998 she was invited by the United States Department of Agriculture to give the keynote address at the annual general meeting of biological control scientists in Hawaii," it stated.[1]

"In 1997, Jennifer started with the Queensland Canegrowers Organisation as Environment Manager. During this time she developed an interest in environmental campaigns and in particular anomalies between fact and perception regarding the health of the Great Barrier Reef," it stated.[1]

She contributes a fortnightly column for The Land newspaper.

"DR JENNIFER MAROHASY: It's ambiguous. It's not clear that climate change is being driven by carbon dioxide levels. But let's move beyond that argument and let's start talking about how we can adapt to what will be a different climate in the future."[4]

"Jennifer Marohasy: I guess the Institute of Public Affairs is concerned that really both sides of politics in Australia have become to some extent, blinded by the green vote, and they’re no longer really considering the evidence when it comes to development of environmental policies. And I guess we’re also concerned that a lot of organisations, for example, CSIRO, the Murray-Darling Basin Commission, Great Barrier Reef Marine Park Authority, seem to need to work in with green groups like the World Wide Fund for Nature, to be able to secure funding, and I think that this really compromises or potentially compromises, public policy decision making in Australia, because you’ve got groups that really should be dispassionately presenting the science in bed if you like with those who are so ideologically driven and so passionate about the environment...."[5]

"Jennifer Marohasy: I think what we see as an inability by so many in Australia to actually work from the basis of the evidence, work from the basis of the facts, is actually a global issue and I think that Lomborg will hopefully, by putting some of these issues in a global context, make us aware of what is happening globally and where we sit in that. Bjorn Lomborg has a lot of opinions with respect to greenhouse and the signing of the Kyoto Protocol and they’re very relevant in the context of current deliberations in Australia."[5]