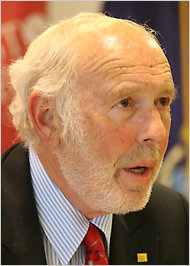 James Harold Simons is a billionaire hedge fund manager. Simons is estimated to be worth at least $11 billion [1] Prior to his work as a hedge fund manager, Simons was a mathematician. Simons used his money to fund several science and technology initiatives [2] as well as several of the most prominent Democratic-aligned SuperPACs in the 2012 election cycles. [3]