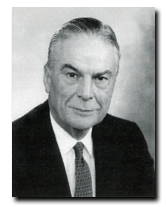 Bowling was born in Paducah, Kentucky. He started working for Philip Morris as a campus representative at his alma mater, the University of Louisville, and soon moved to New York as National Supervisor for college advertising and sales promotion.

According to a New York Times obituary, Mr. Bowling was a descendant of John Rolfe, the first colonist to raise tobacco in America. He joined Philip Morris in 1951. He died in June of 1997.[1]

J.C. Bowling was Vice President of Sales and Corporate Relations for Philip Morris, Inc. from 1965 to 1966. He was Vice President and Director of Sales from 1967 to 1976. He was Senior Vice President from 1977 to 1984 and on the Board of Directors from 1971 to 1984.[2] In December of 1984, Mr. Bowling gave a deposition for the Cipollone v. Liggett, et al case that was 601 pages with 70 exhibits.[3] He served as a Public Relations (PR) Committee Chairman for the Tobacco Institute, Inc. (TI) from 1960 to 1964. e served on the Communications Committee for TI from 1970 to 1975 and from 1979 to 1980. He served on the Budget Committee for TI in 1974. He was Communications Committee Chairman for TI from 1976 to 1978. He served on the Executive Committee of TII from 1981 to 1984 and he was Chairman of the TI Executive Search Committee in 1983. [4] J.C. Bowling is the former Philip Morris director. He was told that Council for Tobacco Research would either exonerate the tobacco industry or, if involved in causing cancer, would identify the ingredients so that they could be taken out.[5] Bowling was involved in a Barclay deal.[6]

In a 1963 interview by Thomas Whiteside for The New Yorker, Bowling said PM's researchers were hard at work modifying cigarettes to make them more "medically acceptable," but he spoke of "the health scare" as if the charges against cigarettes were derived from simple animosity towards the product. Of the link between smoking and disease, Bowling stated, "We believe there is no connection, or we wouldn't be in the business," and later defended the industry's executives as "people with a social conscience." The antismoking case was established, Bowling claimed, "without a full understanding of the facts. "Gosh, we're awed how a story can be told and retold by the anti-cigarette people, and how little attention is given in the press to claims for cigarettes." As an example of the latter, he cited a remark he had heard recently from a physician that if smoking were suddenly halted, there would be "more wife-beating and job dissatisfaction than people's natures can tolerate."[7]

In 1972 interview with the Wall Street Journal, Bowling re-stated a PM promise to consumers first made two decades earlier in the 1950s, that "if our product is harmful, we'll stop making it."[8]

Bowling denied hat cigarette smoking was an addiction in a July 8, 1973 "60 Minutes" interview. Instead, Bowling compared the choice to stop smoking to the choice of whether to eat eggs or not.[9]

After his retirement in 1984, Bowling became a member of Burson-Marsteller's senior advisory board, and worked closely with company founder, Harold Burson until 1995.