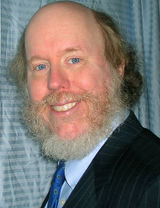 James Bovard is a policy advisor for the Future of Freedom Foundation think tank and has been a regular contributor to FFF's monthly journal, Freedom Daily, since 1996. He is also a contributor to Playboy, American Spectator, and Investor's Business Daily. He has also written for the Wall Street Journal, New York Times, Reader's Digest, New Republic, Washington Post, Washington Times, and Newsweek. [1]

Bovard has operated a blog at JimBovard.com/blog/ since December 2005.

James Bovard is either currently or has been affiliated with the following: