Information Revolution claims to be a grassroots group to fight internet information monopoly. It has also been accused of being a guerrilla marketing campaign run by Google's competitors. 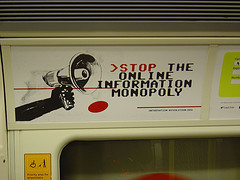 "Is owned by... the same agency that looks after both ASK and Yahoo!, both of course competitors to Google."[1]

"What looks like a grassroots campaign is a very negative marketing blast from at least one rival search engine. And its readers know it: just a quick perusal over the comments to the blog posts on the site reveal that most are lambasting the culprits for trying to pull a fast one. This is going to blow up in Ask’s face, and they should probably think about damage limitation."[2]