Humane Society International (HSI) oversees and coordinates the work of the Humane Society of the United States (HSUS) abroad by addressing animal related issues that cross boarders and impact millions of animals. HSI works with national and jurisdictional governments, humane groups and individuals worldwide for practical, culturally sensitive and long-term solutions to animal issues. HSI has worked with the United Nations, the European Union, the World Trade Organization and the parliaments of Great Britain, Germany and Australia. HSI works with policy makers, conducts briefings and assists in the drafting of legislation, regulations, policies, treaties, trade agreements and resolutions which affect animals. [1]

Over two million dogs and cats are slaughtered each year for their furs and skins, mostly in China and other Asian countries. China produces 85% of the world's fur and has no animal welfare laws. A Swiss Animal Protection Agency documented the slaughter of millions of dogs and cats being bludgeoned, hanged, bled to death, and strangled with wire nooses. Investigators documented 50,000 to 100,000 cat pelts stockpiled at animal byproduct factories in China. At least ten dogs are slaughtered to make a single coat, more if puppies are used. Up to 24 cats are slaughtered to make one fur coat. Dog and cat fur is used in trims, linings, hats, decorative figurines, and folk remedies. Skins are used in dog chew toys and shoe leather. Since 1997, the Humane Society of the U.S. and the Humane Society International have investigated the international fur trade from Asian countries to wholesalers in the U.S., Russia and the European Union. In the Asian fur trade, cats are strangled inside their cages as other cats look on. Dogs are noosed about the neck by metal wires and then slashed across the groin. The wire noose cuts into their throats as they struggle before losing consciousness. In Harbin China, investigators from HSI documented a German shepherd still blinking and conscious as he was being skinned. Although dog and cat fur is banned in the U.S., the "U.S. Fur Products Labeling Act" exempts products $150.00 and under (the price range for fur trimmed garments and accessories). [3], [4] See also War on Animals, section 5 on animals used for clothing. 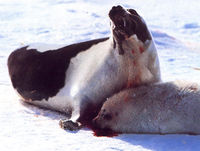 Seal and her pup

Canada's annual seal hunt is the largest commercial hunt of marine mammals on the planet. Canadian regulations stipulate that hunters may kill seals with wooden clubs, hakapiks (ice picks) or guns. Each method is demonstrably cruel. In areas where hunters shoot from moving boats, pups are often only wounded. Also, Canada's main sealskin processing plant deducts $2 from the price for each bullet hole, so hunters do not like to shoot seals more than once. As a result, wounded seals are left to suffer in agony or slip beneath the surface and drown. [5] Rebecca Aldworth is Director of HSI, Canada. She has been a first hand observer of Canada's commercial seal hunt and has escorted over 100 scientists, parliamentarians and journalists to witness the slaughter. On June 15th, Canada’s 2009 commercial seal slaughter came to an end. Over 72,000 defenseless baby harp seals were killed, almost all of them just weeks of age. [6]

HSI's European office is based in the United Kingdom. HSI maintains offices and programs in Canada, India, Costa Rica, Australia. [9]