In the fiscal year endng in December of 2008, the company reported sales of approximately 1.83 billion dollars and had 9,600 employees. [2]

Under its former name of Hazleton Laboratories, Covance was associated with the Council for Tobacco Research and conducted animal testing for tobacco companies. In September of 1972, Carl Baker, the former chairman of the National Cancer Institute (NCI), became the president of Hazleton Laboratories. Hazleton was a "major research contractor" for NCI and had been conducting chemosol treated cigarette studies for "tar" tumorigenicity for nine U.S. cigarette manufacturers since 1970. [3]

In the 1990s, Covance performed studies sponsored by the tobacco industry claiming that even extreme exposure to secondhand smoke was safe for humans. According to the Surgeon General of the United States Public Health Service, secondhand smoke substantially increases the risks of lung cancer and heart disease. Covance internal documents from 2002 discuss a "Philip Morris/Covance Project Team" for studies. At a November 2005 tobacco trade-group conference in Manila, Philippines, Covance's presentation was entitled: How Can Covance Support Research and Development Needs of the Tobacco Industry? [4] 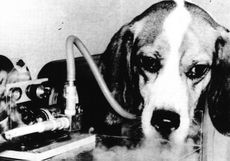 Stop Animal Exploitation Now! (SAEN) is a national research watchdog organization. [7] SAEN has included Covance Laboratories among the worst violators of U.S. laws. Covance amassed a combined 42 violations between their Pennsylvania and Virginia laboratories, including the starving of dogs and failure to provide veterinary care for broken bones. (Government reports and ranking statistics available upon request.) [8]

In an NCI sponsored study, Hazleton provided animal data favorable to the tobacco industry that contributed to the continued marketing of cigarettes. Between February of 1978 and March of 1980, Hazleton conducted a two-year study of for NCI on the the cardiovascular effects of mainstream cigarette smoke and carbon monoxide on "204 permanently tracheostomized male beagle" dogs. The dogs were forced to inhale all of the mainstream smoke generated by six cigarettes a day while being fed diets of varying levels of cholesterol. A number of dogs died during the study. The study concluded that smoking may have "a possible protective effect" and "lent no support to the suggestion that cigarette smoking increases the rate of development of atherosclerosis." [9] See also smoking beagles.

Splenda is the brand name for Sucralose, an artificial sweetener manufactured by by McNeil Speciality Products, a subsidiary of Johnson & Johnson. Sucralose is 600 times sweeter than sugar and is the first no-calorie based sweetener ever developed. It was predicted to be a highly profitable money maker for British sugar giant Tate & Lyle, who commissioned the research. Thousands of animals, including beagles, monkeys, rabbits and rodents were poisoned and killed in various ways for the 20 year study on Sucralose; known in the United States as Splenda.

Thousands of monkeys, rabbits, mice and rats were killed during tests in the United Kingdom. Many died of trauma and others suffered from extreme weight loss, convulsions and intestinal disorders. Some of these experiments were conducted at Covance Laboratories at Harrogate, Yorkshire. The British Union For The Abolition Of Vivisection (BUAV) has estimated that tens of thousands of animals have died in the testing of this product. [10] See also Splenda: Sadistically Sweet.

In 2004 and 2005, the Denver, PA Covance facility amassed 27 violations in the areas of veterinary care, housing and Institutional Animal Care and Use Committee (IACUC) [11] violations. Incidents at this Covance facility caused intense suffering to rabbits, pigs and dogs documented by attending veterinarians and the IACUC. Incidents included placing dogs and pigs in food restrictive devices resulting in severe weight loss and inadequate post surgical care for rabbits. [12]

For a six month period from April 26, 2004, to March 11, 2005, an undercover investigator from People for the Ethical Treatment of Animals (PETA) videotaped systematic abuse of animals at Covance Laboratories' facility in Vienna, Virginia. [13] The investigator's video described the laboratory as a documentation of "terror, sadness, sickness, injuries, suffering, and death" (of monkeys from the wild and Covance breeding facilities). According to the investigator, animal technicians referred to the head veterinarian as "Mr. Let's Wait and See." Primate staff (even those who often abused monkeys) complained repeatedly about a young monkey left in his cage with a broken arm for four days. The break was so severe, that the monkey later had to be euthanized on the advice of a veterinarian who returned from "time off", after this period. The only pain medication it received during the four days was a mild aspirin equivalent. [14] PETA filed a 273-page complaint with the USDA detailing violations of the federal Animal Welfare Act (AWA).[15], [16], [17]

The following is a short list of the over 100 violations of the Federal Food, Drug and Cosmetic Act (FD&C Act) [18] for Covance's facility in Vienna, Virginia. These violations and this video (above) led to Food and Drug Administration (FDA) and USDA investigations.

Covance subsequently filed a lawsuit against PETA and it's operative, Lisa Leitten. In October of 2005, PETA agreed to a ban on conducting any infiltration of Covance for five years. Lisa Leitten agreed to a three year ban on infiltrating any commercial animal research facility worldwide. PETA and Leitten also agreed not to publish or share videos or written materials taken from Covance. The settlement was confirmed by the Circuit Court of Fairfax County, Virginia. [21]

Behind the walls at Covance Laboratories. - PETA & BUAV

For five months in 2003, the British Union for the Abolition of Vivisection (BUAV) sent German journalist Friedrich Mülln to work undercover in the Covance facility in Münster, Germany, Europe's largest primate-testing center. Mülln obtained photographs, video, and other evidence of primate abuse. The laboratory specializes in toxicology and tests on pregnant primates. The undercover footage revealed staff forcing monkeys to "dance" to blaring music, rough handling and screaming at primates. Primates were filmed living in isolation in small, wire cages with little or no natural light and high noise levels (between loud radios and the yelling of staff).

Local authorities inspected the Munster facility after video footage was shown on German television and insisted video cameras be installed to monitor staff working with primates. Covance won a subsequent appeal, arguing that video monitoring would "infringe the rights of the staff". The public prosecutor's office concluded that Covance "had not rendered themselves liable to prosecution," and cleared them of all charges. [22]

Attempt to stop airing of videos in Europe

Covance also filed a lawsuit to forbid further distribution of material. The ban sparked major protests from animal rights and anti-censorship activists. Covance's claims were partially revoked by a higher court, citing the public's right to information over the company's "privacy". The court decided that the video footage could be aired publicly (in a different format and not by animal rights groups). [23] Covance also pressured the BUAV's internet provider to against carrying video and photographs of the investigation. [24] See also video clip of European investigation. [25]

Covance also filed a lawsuit to prevent PETA from airing video footage of their investigation in Europe. However, the judge ruled in PETA's favor. According to Hon. Peter Langan of the United Kingdom, the rough manner and bleak surroundings "cried out for explanation, even to a viewer with no particular interest in animal welfare". Covance Laboratories Limited v. PETA Europe Limited was filed in the High Court of Justice, Chancery Division, Leeds District Registry, Claim No. 5C-00295. The court also ordered Covance to pay PETA £50,000 in costs and fees. [26]

A company division of called Covance Research Products (CRP) is based in Denver, Pennsylvania. CRP imports, breeds and sells laboratory animals. [27] CRP provides canines, rabbits and primates for laboratories and has created and trademarked new breeds of animals, including the "Mini-Mongrel dog". [28] Covance is the largest importer of primates in the U.S. and the world's largest breeder of laboratory dogs. [29]

In 2006, 26,638 primates were imported into the US; a 44% increase over 2004. The three companies responsible for over 75% of all of these imports were Charles River and SNBL and Covance Laboratories at 11,738 that year. Cynomolgus macaques made up 92% followed by rhesus macaques, marmosets, squirrel monkeys and other macaques. Half of all primates were imported from China. [30]