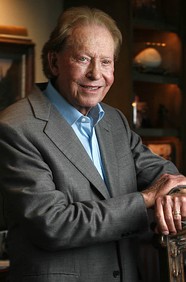 Harold Clark Simmons (born 1931, Golden, Texas)[1] is an American businessman whose banking expertise helped him develop the acquisition concept known as the leveraged buyout (LBO) to acquire various corporations. He is the owner of Contran Corporation and of Valhi, Inc., (a NYSE traded company about 90% controlled by Contran).[2] As of 2007, he has an estimated net worth of around $7.4 billion dollars.[3]

Simmons was a major player in the 2012 Republican Primary, primarily as a donor to SuperPACs formed expressly to elect particular candidates. Simmons gave $1 million to Winning Our Future, the Newt Gingrich aligned SuperPAC, in 2011, and followed it up with a $100,000 contribution in 2012. He contributed $800,000 to Restore Our Future, the Mitt Romney aligned SuperPAC, in the same time frame, while his wife, Annette Simmons, made donations totaling $1.2 million to the Red, White, and Blue Fund supporting Rick Santorum. Since 2011, Simmons has given over $24 million to American Crossroads, a conservative SuperPAC founded by Karl Rove. [5] Simmons also gave $1 million to the Texas Conservatives Fund.[6] TCF supported Lieutenant Governor David Dewhurst's failed bid for the Senate, spending over $5.8 million against his primary opponent Ted Cruz. During the presidential primary, Simmons (through his Contran Corp.) gave $1 million to the pro-Rick Perry group Make Us Great Again.[7]

All told, Simmons and his wife, Annette, gave nearly $27 million in the 2012 election.

Simmons stood to make a lot of money were a Romney administration to have come to fruition and changed the rules on nuclear waste storage, had Simmons's company won a contract.[8]

Harold Simmons owns the Texas Solutions PAC, aka TEXSOL PAC, the political action committee for his business Waste Control Specialists. The PAC made illegal contributions to 18 lawmakers in Texas worth nearly $65,000. Simmons was the only donor at the time. The lawmakers ultimately returned the cash and the PAC paid a $6,450 fine.[9]

During the 2004 presidential campaign, Simmons made a $4 million donation to the controversial group Swift Vets and POWs for Truth. He also donated $100,000 to George W. Bush's January 2005 inaugural ball.[10]

In 2008 Simmons was listed as the sole donor to the "American Issues Project," an independent political group which attempted to show that 2008 Democratic Presidential candidate Senator Barack Obama was closely tied to sixties era radical William Ayers. The group's advertisements were rejected by some news outlets, because they appeared to be in violation of campaign finance laws and because of concerns about potentially libelous statements about Ayers.[11]

After graduating from college in 1952, Simmons first worked for the U.S. government, then for a Dallas-based bank. In 1960, using $5,000 of his savings, he borrowed money to buy a small drugstore. In 1973, he sold the 100 drugstore chain, worth more than $50 million, to Eckerd Corporation, and launched a career as an investor.[12]

Simmons donated money to help fund the Hobby-Eberly Telescope Dark Energy Experiment at the University of Texas. He has previously given to UT athletic programs and the McCombs School of Business. By 2005, total donations from his family and foundation to the UT Southwestern Medical Center at Dallas exceeded $70 million.[12] In 2008 the Harold Simmons Foundation made a donation of $5 million to the Dallas Zoo, the largest single private contribution in the zoo's 120 year history.[14]

Wikipedia also has an article on Harold Simmons. This article may use content from the Wikipedia article under the terms of the GFDL.