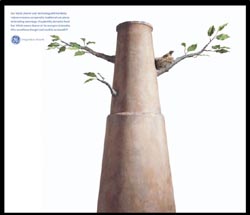 In May 2005 General Electric, the world's tenth largest corporation, unveiled its $90 million "Ecomagination" PR and advertising campaign. In the media statement announcing the initiative, the company's CEO, Jeff Immelt, stated that "Ecomagination is GE's commitment to address challenges such as the need for cleaner, more efficient sources of energy, reduced emissions and abundant sources of clean water."[1]

"Ecomagination is about the future. We will focus our unique energy, technology, manufacturing and infrastructure capabilities to develop tomorrow's solutions such as solar energy, hybrid locomotives, fuel cells, lower-emission aircraft engines, lighter and stronger materials, efficient lighting and water purification technology. We will establish partnerships with our customers to tackle their most pressing environmental challenges and double our research spending to develop the products and services they need. And we will use these technologies to improve our own energy efficiency and environmental performance," Immelt said in the media statement.[1] Immelt also pledged that the company would "reduce its GHG emissions 1 percent by 2012 and the intensity of its GHG emissions 30 percent by 2008 (both compared to 2004)".

On hand at GE's launch to lend the company's announcement some third-party credibility was Jonathan Lash, the president of the Washington-based think tank, the World Resources Institute. Where the world's leading climate scientists were calling for substantial cuts to greenhouse gas emissions, Lash lauded GE's pledge of a marginal change. "This is a hugely important step by one of the world's most important companies. It is particularly encouraging that GE is focusing its research on cleaner technologies and making a serious, meaningful and accountable commitment to achieve stabilization of greenhouse gases that contribute to climate change," Lash gushed in the company's media statement.[1]

In May 2007, GE CEO Jeffrey R. Immelt announced that the company's "Ecomagination" unit had launched "11 new products and services ... including a hybrid locomotive and a carbon offset company," all in that month. Immelt said, "Work on energy efficiency, working on emissions reductions, conservation, clean water is simply good business. In our case, it has always been about growing the company." [2]

"Ecomagination has backlog of orders worth over US$50 billion and chalked up US$12 billion in sales last year," reported Reuters. However, "despite the expanding market, Immelt has stuck with his sales target of US$20 billion in 2010." [3]

A September 2007 Wall Street Journal analysis of "Ecomagination" noted that, two years into the campaign, GE "continues to sell coal-fired steam turbines and is delving deeper into oil-and-gas production. Meanwhile, its finance unit seeks out coal-related investments including power plants. ... Yet these limitations haven't stopped GE from making a big marketing to-do of its commitment to the environment," reported Kathryn Kranhold. "The primary focus of the conglomerate's marketing efforts these days is a $1 million-a-year campaign to publicize its search for 'innovative solutions to environmental challenges.'" [4]

As part of Ecomagination, GE said it will sell $14 billion of "self-described environmentally friendly products" in 2007. It also claimed to have reduced "its own greenhouse-gas emission by 4% between 2004 and 2006," though GE does not count emissions from many power plants part-owned by the company. Kranhold of the Wall Street Journal described the discounted plant emissions as "an unknown but unquestionably significant amount." [5]