The financial industry has lobbied heavily on both the bank bailout and the proposed reforms of regulations governing the industry.

The U.S. Chamber of Commerce employed 34 registered lobbyists to lobby the House Committee on Financial Services in the second quarter of 2009. Of those, 19 are former government officials, including John Michael Gonzalez, who was until 2009 the former chief of staff to Rep. Melissa Bean (D-Ill.), who sits on the House Committee on Financial Services. Gonzalez works for the firm Peck, Madigan, Jone & Stewart. Ethics laws precluded Gonzalez from lobbying Bean's office directly, but he can lobby the members and staff of the committee she sits on.[3]

The derivatives lobby, headed by large banks JPMorganChase, Goldman Sachs and Credit Suisse, worked the New Democrats, including Rep. Melissa Bean (D-Ill.), to get changes made to a bill aimed at filling holes in derivative regulation. Officials in the Obama administration stated that the resulting bill, released as a discussion draft, “created too many loopholes and had the potential to exclude all hedge funds and corporate end-users from oversight.”[4] 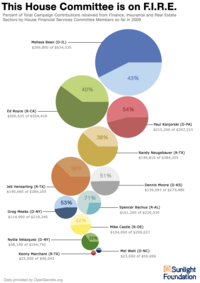 Twenty-seven members of the House Committee on Financial Services received over one-quarter of their contributions from the finance, insurance and real estate (FIRE) sector in 2009. (Click to enlarge.) 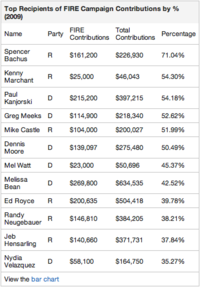 Ranking Member Spencer Bachus received 71% of his campaign contributions from the finance, insurance and real estate (FIRE) sector so far this year. For his career, the Alabama congressman receives 45% of his contributions from the FIRE sector. Bachus leads the committee in his reliance on FIRE sector campaign contributions. Bachus has taking a position in opposition to most of the regulatory reforms. Bachus recently stated in a hearing, “this is absolutely the wrong time to be creating a new government agency empowered not only to ration credit, but to design the financial products offered to consumers.” [4]

Pennsylvania Rep. Paul Kanjorski is the Chair of the Subcommittee on Capital Markets, Insurance, and Government Sponsored Enterprises and is tasked with crafting many of the initial bills for the proposed financial regulatory reform. While undertaking this work in the first half of 2009, Kanjorski raised $397,215, 54% of it from the FIRE sector. For his career, Kanjorski received 44% of his contributions from the FIRE sector. Of all Financial Services Committee members, only Kanjorski and Bachus receive over 40% of their career campaign contributions from the FIRE sector. Kanjorski has stated that he will be watchful of the influence the finance and insurance companies hold in the committee, “”We must ensure that special interests do not weaken particular solutions to the point of becoming toothless.” Earlier this year, however, Kanjorski held a fundraiser that was thrown by lobbyists for financial services organizations. Kanjorski refused to release a list of attendees to the fundraiser. Recently, Kanjorski has introduced a series of bills to reform the regulatory structure for the SEC, hedge funds and insurance. Many trade groups and companies that have donated to Kanjorski and other committee members are organizing to oppose large sections of the bills. [4]

Lobbying by other industries

Rep. John Campbell (R-CA) offered an amendment to legislation creating a Consumer Financial Protection Agency that would provide a carve-out for auto dealers. The amendment would strip the the newly proposed agency of its ability to oversee financing by car dealers. Campbell is a former car dealer who at the time rented out seven properties to car dealers or car repair shops. (Six car dealerships and one repair shop.) The 2008 personal financial disclosure filed by Campbell earlier in 2009 showed that the total value of the these properties was between $6,500,007 and $31,000,000 and his total income from the properties to be between $700,000 and $7,000,000. According to a release by Public Campaign and Common Cause, Campbell has received over $170,000 in campaign contributions from auto dealers over his career. In December of 2008, Campbell stated that he would recuse himself from voting on any automotive bailout plans considering how close his personal finances are tied to the industry. When the Auto Industry Financing and Restructuring Act (H.R. 7321) did come to a vote, Campbell voted “present,” fulfilling his promise to avoid a conflict of interest. According to the Sunlight Foundation, with his 2009 amendment, "Campbell has inserted himself directly into a conflict of interest situation by offering an amendment that could potentially affect his bottom line and those of his campaign contributors."[5]