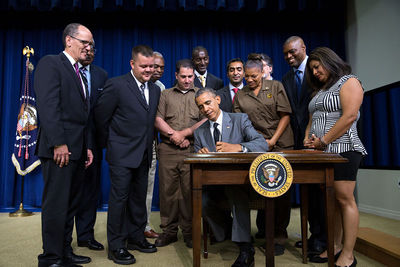 The Fair Pay and Safe Workplaces Executive Order (Executive Order 13673, hereafter "the E.O.") is an executive order issued under President Obama on July 31, 2014 that aims to ensure that federal contractors comply with federal wage laws, health and safety standards, and civil rights laws.[1] Federal contractors are pushing back hard on the E.O. Please see the Sourcewatch.org profiles of the HR Policy Association and the Professional Services Council for more.

In 2014, the U.S. Department of Labor estimated that some 24,000 businesses have federal contracts.[2] But "the opportunity to contract with the federal government is a privilege, not an entitlement. Taxpayer dollars should not reward corporations that break the law, and contractors who meet their responsibilities should not have to compete against those who do not," U.S. Secretary of Labor Thomas E. Perez said of the E.O.[3]

Lobbyists and trade associations that represent major contractors, including the HR Policy Association and the Professional Services Council, have been major opponents of the E.O. Many of their member companies and/or member companies' subsidiaries have histories of labor law violations that would be actionable under the E.O. See more below.

See Related Articles for links to additional reports and information on federal contractors, the E.O., and other labor issues.

What Is Reportable Under the Executive Order?

The E.O. requires that companies applying for federal contracts of $500,000 or more make a report to the contracting agency that details "any administrative merits determination, arbitral award or decision, or civil judgment" in the preceding three years for violations under any of the following labor laws:[1]

Opposition to the Executive Order 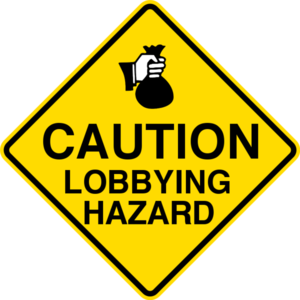 The Human Resources Policy Association (HR Policy Association or HRPA) is a trade association describing itself as "the lead public policy organization of chief human resource officers" and represents more than 360 corporations in the United States, many of them federal contractors.[4] HRPA is a major opponent of the E.O.

HRPA claims that its members "have a long standing commitment to complying with all federal and state employment and labor laws,"[5] but many of the member companies represented on its board of directors and/or their subsidiaries have multiple serious and repeat violations of Occupational Safety and Health Administration (OSHA) workplace safety standards that would be actionable under the E.O.

The Professional Services Council (PSC) is a trade association describing itself as "the leading advocate and resource for the federal professional and technical services industry."[6] It has around 370 member corporations. PSC is a major opponent of the E.O.

In a 2015 statement to the House Committee on Education and the Workforce, then-PSC President Stan Soloway claimed, "There is no evidence of a widespread problem of pervasive, repeated or willful violations of labor laws by federal contractors," and called the order "a de facto blacklisting of well-intentioned, ethical businesses."[7] However, many of PSC's member companies and/or their subsidiaries have multiple serious violations of Occupational Safety and Health Administration (OSHA) workplace safety standards that would be actionable under the E.O.

Other corporations and organizations representing corporate interests that have lobbied on the E.O. include:

Guidance for Implementation and Public Comments

President Obama signed the E.O. on July 31, 2014. The Department of Labor published proposed guidance for implementing the E.O. on May 27, 2015, followed by a 60-day public comment period.[3] Proposed guidance and filed comments can be found here: Guidance for Executive Order 13673, "Fair Pay and Safe Workplaces". As of February 2016, the Federal Acquisition Regulatory Council, or FAR Council, of the Office of Management and Budget (OMB) is working on finalizing regulations related to the E.O.