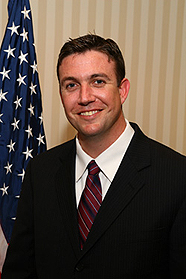 Duncan D. Hunter has been a Republican member of the United States House of Representatives, representing the 52nd district of the State of California, since 2009 (map). He replaced his father, Rep. Duncan L. Hunter (R-Calif.), who sought the 2008 Republican presidential nomination.

Hunter's platform on national security issues includes strengthening the military, making sure the men and women serving have the best equipment and training available, and eliminating government red tape and bureaucratic roadblocks that hamper efforts to obtain new weapons and intelligence technology.[1]

On his campaign website, Hunter lays out his plan on immigration as follows: No amnesty, drivers licenses, official IDs or non-court ordered benefits for illegal immigrants. Also, he would support a double border fence along the U.S and Mexico border, increasing penalties on business that knowingly hired illegal immigrants, ending birthright citizenship for those born to illegal immigrants, and increase support for the Border Patrol. [1]

Hunter supports a strict limit on how fast government can grow. He believes that reducing taxes is the best way to foster economic growth, that the tax code should be simplified, that the Alternative Minimum Tax should be changed to protect working families. He also would support making the Bush tax cuts permanent, as well as eliminating the death tax. [1]

Hunter believes that life begins at conception. He says he would ban partial birth abortions and federal funding to pay for abortions. He also opposes same-sex marriages. [1]

In order to continue the level of benefits for seniors, Hunter believes that there should be more options for young people investing their own retirement funds. [1]

Hunter believes that the government should not pass laws that restrict the right of any law-abiding citizen to purchase, own and legally use firearms. [1]

Hunter believes that resources for schools should go directly into classrooms, and that home schooling should be embraced.[1]

On his campaign website, Hunter says that America should adopt a Fair Trade policy that enhances foreign markets, but that also protects American consumers from potentially inferior or dangerous foreign products. [1]

Hunter was the 2008 Republican nominee to replace his father, Rep. Duncan L. Hunter (R-Calif.), who ran for President, in the 2008 congressional elections.[2]. He went on to defeat Democratic nominee Michael Lumpkin in the November 2008 general election.[3]

Hunter will be assigned committees if and when he is elected to Congress.

Corresponding article on Wikipedia and Cause Caller. (If Cause Caller link does not work, pick from its list of senators and representatives.)