From SourceWatch
(Redirected from Dr. Oz)
Jump to navigation Jump to search

He received a Bachelor's in Biology from Harvard University in 1982 after attending an elite prep school. He received an MD and MBA from the University of Pennsylvania in 1986. He did his residency at Presbyterian Hospital in New York City, where he practiced as a cardiac surgeon. In 2001, he became a professor at Columbia University, where he engaged in controversial experiments on dogs that were demonstrably cruel, as described below. Those activities were not widely known when he started appearing as a guest on the Oprah Winfrey Show in 2006, which he parlayed into an eponymous show in 2009.

The Dr. Oz show aired more than 1500 episodes over more than a decade, some of which generated substantial controversy. In 2016, he featured GOP presidential candidate Donald Trump on his show after Trump claimed to be in excellent health, a PR coup for Trump. (Numerous news accounts have detailed the unusual hyperbole about Trump's health purportedly issued by his personal physician and others.) In 2022, Oz announced he would seek the GOP nomination to be the party's candidate for the U.S. Senate. Trump backed Oz in the primary. Oz faces Democratic candidate John Fetterman, the Lieutenant Governor of Pennsylvania and the former Mayor of the Town of Braddock, in the general election in November 2022.

Cruelty to Puppies Detailed by a Whistleblower at Columbia University 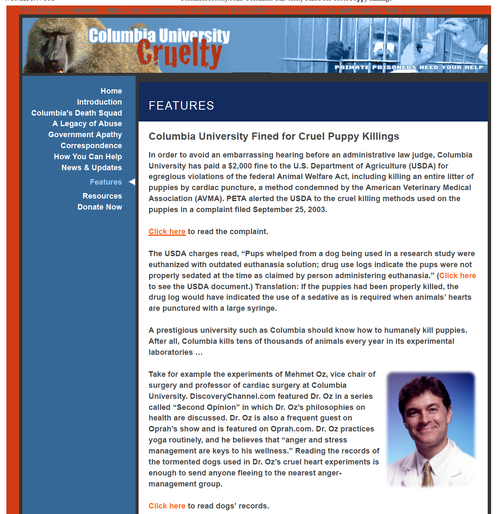 In 2004, complaints about Dr. Mehmet Oz’s dog experiments were cited in a report from an internal investigation into allegations of poor animal care made by Dr. Catherine Dell’Orto, a post-doctoral veterinarian. [1] See also individual reports of Dr. Oz's dog experiments. [2]

According to the report, in Dr. Oz's lab at Columbia University "highly invasive and stressful experiments" on dogs were performed without a "humane end point." [3]

The Animal Welfare Act violations detailed in the reported included a litter of whelped puppies killed by painful cardiac injection:

"The screams of these puppies could be heard through closed doors. All of these puppies, lying in a plastic garbage bag, were killed in the presence of their litter mates."[4]

Subsequent applications for grants to the National Institutes of Health (NIH) by Dr. Oz have been denied.[9] In 2004, Columbia paid $2,000 in fines to the USDA. [5]

Promoting Others Described as Charlatans

The James Randi Educational Foundation has announced that: "The Media Pigasus Award goes to Dr. Mehmet Oz, who has done such a disservice to his TV viewers by promoting quack medical practices that he is now the first person to win a Pigasus two years in a row. Dr. Oz is a Harvard-educated cardiac physician who, through his syndicated TV show, has promoted faith healing, "energy medicine," and other quack theories that have no scientific basis. Oz has appeared on ABC News to give legitimacy to the claims of Brazilian faith healer “John of God,” who uses old carnival tricks to take money from the seriously ill. He's hosted Ayurvedic guru Yogi Cameron on his show to promote nonsense "tongue examination" as a way of diagnosing health problems. This year, he really went off the deep end. In March 2011, Dr. Oz endorsed "psychic" huckster and past Pigasus winner John Edward, who pretends to talk to dead people. Oz even suggested that bereaved families should visit psychic mediums to receive (faked) messages from their dead relatives as a form of grief counseling." [6] wiki