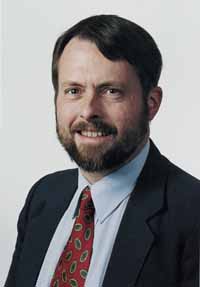 Doug Bandow was a syndicated columnist with Copley News Service and a senior fellow of the Cato Institute. Following revelations that he had accepted payments from lobbyist Jack Abramoff he resigned from Cato and was suspended from Copley News Service. In late December 2005 it was announced that he had accepted an appointment as vice president of policy at Citizen Outreach. [1]

Prior to Copley terminating the synidcation of his column Bandow's column was carried by numerous major newspapers. He has also written for magazines such as Fortune. Bandow also speaks regularly in front of students and business groups and frequently appeared as a radio and television commentator.[2]

A former visiting fellow at the Heritage Foundation, he served as a special assistant to President Ronald Reagan. However, he has become a vocal critic of President George W. Bush, calling on him to "apologize to Americans" for his policies in Iraq. Bandow is a member of the Coalition for a Realistic Foreign Policy.

Bandow is also a member of the Board of Scholars of the Virginia Institute for Public Policy.

In December 2005 Businessweek revealed Bandow had "accepted money from Abramoff for writing between 12 and 24 articles over a period of years, beginning in the mid '90s." The articles - for which Bandow was paid up to $2,000 a piece - reflected the interests of Abramoff's clients. [3]

The New York Times reported that Abramoff's clients included the Commonwealth of the Northern Mariana Islands and the Mississippi Band of Choctaw Indians. "In one column in 2001, Mr. Bandow extolled the free-market system that had allowed the Marianas to thrive, saying that fighting terrorism was no excuse for "economic meddling" - the same position that Mr. Abramoff was being paid to advance," Anne E. Kornblut and Philip Shenon wrote. [4]

In a 1997 column Bandow wrote of the Choctaws gambling interests that "there's certainly no evidence that Indian gambling operations harm the local community." [5]

Biographical notes and archives of articles by Bandow