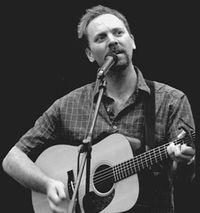 David Rovics (born April 10, 1967) is an indie singer/songwriter and grassroots political protestor from the United States. His music is most accurately described as protest-folk and concerns topical subjects such as the 2003 Iraq war, anti-globalization and social justice issues. Rovics is an outspoken critic of not only George W. Bush and the Republican Party, but also figures like John Kerry and the Democratic Party as a whole. He is vocal on these subjects on stage, radio shows and in press releases.

Rovics is well-known and active in human rights and anti-war struggles throughout the world. Some have said that by listening to all of Rovics' songs, one can obtain a solid in-depth historical education. Rovics is a revolutionary along the lines of a Ben Manski, who he is good friends with, and uses his musical skills for the betterment of society and to engender democracy. He states on his website, describing himself, "He will make you laugh, he will make you cry, he will make the revolution irresistible."[1]