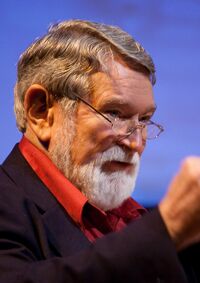 The website also describes how Korten and others in his field attended a 1987 NGO symposium which concluded, "The development policies and strategies promoted by most official aid agencies benefit the rich at the expense of the poor and the environment. A fundamental change is imperative and the leadership will not come from establishment institutions. It must come from citizen action."[2] Partially in response to these revelations, Korten and additional NGO leaders and members founded the Living Economies Forum (formerly called the People-Centered Development Forum).

The Forum has engaged in several campaigns, most recently, "Challenging the story that it is our human nature to seek individual advantage in disregard of our neighbor and Earth is a dead rock free for the taking." since 2015.[3]

Korten is a critic of globalization and wishes to replace global corporate capitalism with "regionally self-reliant, energy-efficient, locally rooted living economies"[4] He also uses examples from the natural world to describe his ideal economic model, saying, "the lessons of life’s self-organizing evolutionary journey to the quest to displace a global corporate-driven money-seeking suicide economy with a life-serving living Earth economy."[1]