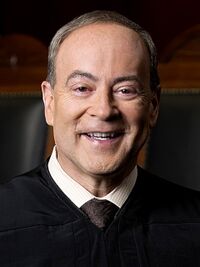 Clint Bolick is an Arizona Supreme Court Justice.[1] Before being named to the bench by Gov. Doug Ducey (AZ), he was Vice President for Litigation of Arizona's Goldwater Institute, a member of the right-wing State Policy Network (SPN),[2] and a research fellow with the Hoover Institution. He co-founded the Institute for Justice (and was its Vice President and Director of Litigation) and was president of the Alliance for School Choice.[3]

Bolick was an assistant at the Equal Employment Opportunity Commission when U.S. Supreme Court Justice Clarence Thomas was EEOC chairman. While working for the Landmark Legal Foundation, Bolick led the defense for the first Wisconsin school voucher program.[4] Before that, Bolick worked for the Mountain States Legal Foundation[5]

Until Bolick began presenting himself as a defender of low-income African American schoolchildren, he had been most closely associated with attacks on affirmative action. He is the author of "The Affirmative Action Fraud: Can We Restore the American Civil Rights Vision?" published by the Cato Institute.[4]

Bolick told the National Review with regard to Goldwater's litigation center, "We realized that on some issues we needed to go to court or we wouldn't be able to change anything."[6] SPN's focus includes lawsuits that make it harder to deal with the influence of money that in the view of many Americans, on the right and the left, is corrupting our democracy. For example, through Goldwater, Bolick and his colleague, Nick Dranias have worked to strike down Arizona's clean election laws, as shown by a 2013 report by the Center for Media and Democracy (CMD) and Arizona Working Families. And then Goldwater paid them enormous bonuses, of $35,000 and $50,000 respectively, the year Goldwater got a million dollars in public taxpayer funds for attorneys' fees, the report notes. Goldwater also raised the salaries of Bolick, Dranias and its executive director in Phoenix to DC-type salaries. (One SPN document reveals that one of the services SPN Executive Director Tracie Sharp provides is a salary review and comparison to help the think tanks set their executive pay; meanwhile, many SPN affiliates are heavily critical of how much public workers are paid, but groups like Goldwater pay their top staff exponentially more, as CMD has shown.)[7]

Bolick was appointed to the Arizona Supreme Court by Gov. Doug Ducey in January 2016. 'Think Progress called the Ducey's choice of Bolick, "The Most Chilling Political Appointment That You’ve Probably Never Heard Of" citing the now-justice's quarter-century efforts to "make the law more friendly to anti-government conservatives."[8]

Bolick was the recipient of a $250,000 award from the Bradley Foundation in 2006 for his work on school choice.

In 2014, the Bradley Foundation gave the Goldwater Institute $350,000 in first time support for a state-based litigation alliance tentatively named the Goldwater Litigation Alliance (GLA), “an effort begun in large part at Bradley’s behest to expand the capacity of state think tanks to include litigation within their institutional skill sets.” Bolick's leadership was explicitly cited as a reason for Goldwater to give that money.