Citizens for Fire Safety (CFFS) was a trade association for the flame retardant industry that was apparently shuttered in late August 2012.[1] It was founded in 2007[2] by Albemarle Corporation, Chemtura Corporation, and ICL Industrial Products.[3] It had originally claimed on its Web site to be "a coalition of fire professionals, educators, burn centers, doctors, fire departments and industry leaders, united to ensure that our country is protected by the highest standards of fire safety," but it altered its site to clarify that it was a trade association following a series of articles exposing its role in promoting toxic flame retardants published by the Chicago Tribune in May 2012.[4]

The group was reported to be a lobbying front for the chemical industry, which opposes legislation to ban a type of decabrominated diphenyl ether that has been used for decades as a fire retardant in furniture. Critics say the chemical breaks down into a toxin, and is suspected of harming the environment.[5]

One of the primary flame retardants reported to be defended by the group is called "Firemaster 550." Its precise chemical makeup is apparently an industry secret shared only with a select few U.S. Environmental Protection Agency (EPA) employees sworn to secrecy, but when EPA approved it, it was known to contain "two brominated compounds, known as TBB [2-ethylhexyl 2,3,4,5-tetrabromobenzoate] and TBPH [di(2-ethylhexyl)-2,3,4,5-tetrabromophthalate]. Both are structurally similar to a plastic-softening phthalate that Congress has banned in children's products. Called DEHP, the phthalate is listed in California as a known carcinogen and developmental toxin," according to the Chicago Tribune.[6] 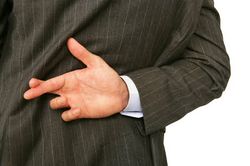 On May 6, 2012, the Chicago Tribune published the first article in its four-part series on flame retardants, "Playing with Fire." It was topped with a picture of Dr. David Heimbach, a burn expert who testified against a 2011 California state Senate bill that could have reduced the use of flame retardant chemicals in furniture. It was revealed after his testimony that he was paid for his travel, and for some of his time, by CFFS.[8]

The Tribune reported, "As evidence of the health risks associated with these [flame retardant] chemicals piled up, the industry mounted a misleading campaign to fuel demand. There is no better example of these deceptive tactics than the Citizens for Fire Safety Institute, the industry front group that sponsored Heimbach and his vivid testimony about burned babies."[8]

In a section entitled "Fear and Deception," the Tribune laid out these "deceptive tactics":

"In the website photo, five grinning children stand in front of a red brick fire station that could be on any corner in America. They hold a hand-drawn banner that says 'fire safety' with a heart dotting the letter "i."

"Citizens for Fire Safety describes itself as a group of people with altruistic intentions: 'a coalition of fire professionals, educators, community activists, burn centers, doctors, fire departments and industry leaders, united to ensure that our country is protected by the highest standards of fire safety.'

"Heimbach summoned that image when he told lawmakers that the organization was 'made up of many people like me who have no particular interest in the chemical companies: numerous fire departments, numerous firefighters and many, many burn docs.'

"But public records demonstrate that Citizens for Fire Safety actually is a trade association for chemical companies. Its executive director, Grant Gillham, honed his political skills advising tobacco executives. And the group's efforts to influence fire-safety policies are guided by a mission to 'promote common business interests of members involved with the chemical manufacturing industry,' tax records show.

"Its only sources of funding — about $17 million between 2008 and 2010 — are 'membership dues and assessments' and the interest that money earns.

"The group has only three members: Albemarle, ICL Industrial Products and Chemtura, according to records the organization filed with California lobbying regulators. Those three companies are the largest manufacturers of flame retardants and together control 40 percent of the world market for these chemicals, according to The Freedonia Group, a Cleveland-based research firm. . . .

"Citizens for Fire Safety has portrayed its opposition as misguided, wealthy environmentalists. But its opponents include a diverse group of public health advocates as well as firefighters who are alarmed by studies showing some flame retardants can make smoke from fires even more toxic.

"Matt Vinci, president of the Professional Fire Fighters of Vermont, faced what he called 'dirty tactics' when he successfully lobbied for his state to ban one flame retardant chemical in 2009.

"Particularly offensive to Vinci were letters Citizens for Fire Safety sent to Vermont fire chiefs saying the ban would 'present an additional hazard for those of us in the fire safety profession.' But the letter's author wasn't a firefighter; he was a California public relations consultant. . . .

"The group also has misrepresented itself in other ways. On its website, Citizens for Fire Safety said it had joined with the international firefighters' association, the American Burn Association and a key federal agency 'to conduct ongoing studies to ensure safe and effective fire prevention.'

"Both of those organizations and the federal agency, however, said that simply is not true.

"'They are lying,' said Jeff Zack, a spokesman for the International Association of Fire Fighters. 'They aren't working with us on anything.'

"After inquiries from the Tribune, Citizens for Fire Safety deleted that passage from its website."[8] 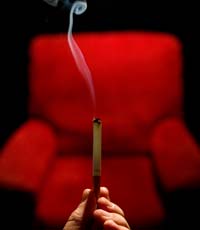 According to the Chicago Tribune, which reviewed thousands of government, scientific, and internal industry documents, "Big Tobacco . . . wanted to shift focus away from cigarettes as the cause of fire deaths, and continued as chemical companies worked to preserve a lucrative market for their products . . . These powerful industries distorted science in ways that overstated the benefits of the chemicals, created a phony consumer watchdog group that stoked the public's fear of fire[,] and helped organize and steer an association of top fire officials that spent more than a decade campaigning for their cause."[8]

In a later article, the Chicago Tribune reported, "Smoldering cigarettes were sparking fires and killing people. . . . The industry insisted it couldn't make a fire-safe cigarette that would still appeal to smokers and instead promoted flame retardant furniture -- shifting attention to the couches and chairs that were going up in flames. But executives realized they lacked credibility, especially when burn victims and firefighters were pushing for changes to cigarettes. So Big Tobacco launched an aggressive and cunning campaign to 'neutralize' firefighting organizations and persuade these far more trusted groups to adopt tobacco's cause as their own. The industry poured millions of dollars into the effort, doling out grants to fire groups and hiring consultants to court them."[9]

(The Tribune said it "discovered details about Big Tobacco's secretive campaign buried among the 13 million documents cigarette executives made public after settling lawsuits that recouped the cost of treating sick smokers."[9] To search through documents in the "Tobacco Library" yourself, go here. To more easily find information about tobacco industry behavior, visit SourceWatch's TobaccoWiki here.)

The Environmental Health Fund in Massachusetts explains that:

studies show that PBDEs may harm the developing brain, impair sperm development, and impair thyroid function. Washington State and Maine have banned three of the most widely used PBDEs and many states are considering following suit, based upon evidence that these chemicals are persistent, bioaccumulative and toxic. Chemical manufacturers of PBDEs have a direct financial interest in preventing limits on the use of their product. They have organized themselves to oppose policies to require non-toxic fire safety through PBDE restrictions that are advancing across the U.S.

Four principal corporations that manufacture PBDEs are Albemarle, Israel Chemicals Limited (ICL), Chemtura, and Tosoh. When they saw that some of their flame retardant products were coming under regulatory pressure, they contracted with Burson-Marsteller, the giant global public relations firm, to change public and legislative perceptions about the hazards associated with PBDEs.

CFFS forms “chapters” in states where it actively lobbies, including Connecticut, Illinois, Maine, Maryland, Massachusetts and Minnesota. In California, a related organization called “Californians for Fire Safety” was created by the public relations consulting firm Jacobson Communications, and is explicitly listed on the lobbyist registration website.[10]