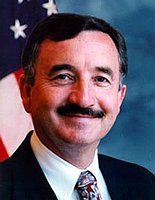 Ciro D. Rodriguez, a Democrat, is a former U.S. Representative for the 23rd Congressional District of Texas, having served 2007 to 2011.[1]

General information about important bills and votes for can be found in Congresspedia's articles on legislation. You can add information you find on how Ciro D. Rodriguez voted by clicking the "[edit]" link to the right and typing it in. Remember to cite your sources!

Rodriguez voted against the Authorization for Use of Military Force Against Iraq Resolution of 2002 that started the Iraq War.[2]

For more information see the chart of U.S. House of Representatives votes on the Iraq War.

Rodriguez was born in Piedras Negras, Coahuila, Mexico, but was raised and received his education in San Antonio, Texas. He graduated from Harlandale High School and briefly attended San Antonio College, but subsequently graduated from St. Mary’s University with a B.A. in Political science. He received his Master of Social Work from Our Lady of the Lake University. [1]

From 1975 to 1987, Rodriguez served as a board member of the Harlandale Independent School District, working as an educational consultant for the Intercultural Development Research Association and served as a caseworker with the Department of Mental Health & Mental Retardation. From 1987 to 1996, he taught at Our Lady of the Lake University. [2]

In January 1997 the 28th district's congressman Frank Tejeda died at the start of his third term. A special election to fill the remainder of his service was held in April, resulting in Rodriguez defeating his nearest rival Juan F. Solis III with 66.7%.

After being sworn in on April 12, Rodriguez served as a member of the Armed Services, Veterans' Affairs and Resources Committees. He was also the ranking member of the VA Subcommittee on Health. Additionally, he led the Congressional Hispanic Caucus as chairman from 2003-04 after four years as its Health Care Task Force Chairman.

In 2003, Republican-led redistricting forced Rodriguez into the 28th Congressional District, then held by Democrat Henry Cuellar. Cuellar won the 2004 primary to represent the full district.

In 2006, Rodriguez once again declared for the Democratic primary, but again lost to Cuellar. In June, however, the Supreme Court declared that a 2003 Republican-backed redrawing of the 23rd Congressional District was unconstitutional in the way that it minimized Hispanic voting power and ordered the lines of the district redrawn. The new district contained Rodriguez's home and Democrats fielded him and five other candidates to face sitting Rep. Henry Bonilla in his November 2006 bid for reelection. [3] Because the decision was made after the primary election had taken place, the November 7th general election became a special election, with a candidate needing over 50% of votes cast to claim the seat. Bonilla received 48% of the vote in the election, thus falling short of the mark needed to prevent a run-off between Bonilla and the second-highest vote-getter, Rodriguez, who won roughly half of Bonilla's total. [4] In the runoff, however, Rodriguez defeated Bonilla 55%-45% to take possession of the seat. [5]

Before Hillary Clinton conceded the race, Ciro D. Rodriguez, as a superdelegate, had not endorsed a candidate for President.

For more information and sources, see the state page for this superdelegate linked to in the blue box above.

This section contains links to – and feeds from – money in politics databases. <crpcontribdata>cid=N00006067&cycle=2006</crpcontribdata>