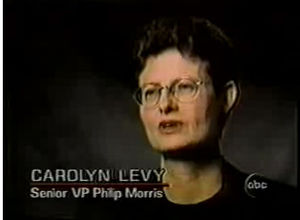 Carolyn J. Levy, was born in Albuquerque, New Mexico and graduated from the State University of New York (SUNY) Albany in Albany, New York with a bachelor of arts degree in psychology in 1969. Ms. Levy received a Ph.D. in psychology from SUNY Albany n 1973.

Prior to joining Philip Morris U.S .A., she served as a Postdoctoral Fellow at Florida State University from 1974 to 1975. Ms. Levy joined Philip Morris U.S.A. in 1975 as Research Scientist. In 1980, she was appointed Senior Research Scientist. The following year she was appointed Manager of Commercial Development. She was named Manager, Product Evaluation, Research and Development in 1984. Ms. Levy served as Assistant Director and Director, Consumer Research from 1986 to 1991. From 1991 to 1993 she served as Director, Planning and in 1993 was appointed Vice President, Planning. She had was Senior Vice President of Marketing and Sales Information for Philip Morris U.S.A. since December 1994.[3]