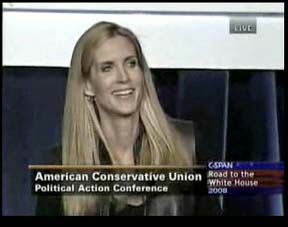 Ann Coulter is "a lawyer and author, famous for despising anyone politically left of Ronald Reagan" [1], and one of the most vitriolic right-wing ideologues currently appearing on national television. [2]

"Political positions Coulter disagrees with are briefly, brusquely, and often inaccurately described, then dismissed, often with an insult. The same steps are repeated several times per column. The technique is enthralling for readers already in agreement with Coulter. For anyone else, it is uninteresting.

"Coulter was fired from MSNBC when she told a disabled Vietnam veteran, 'people like you caused us to lose that war.' She was fired from the conservative National Review when she turned in a column offering a final solution to the Muslim problem: 'We should invade their countries, kill their leaders and convert them to Christianity'." [3]

In July 2004, USA TODAY "dropped plans" to have Coulter "write a daily column" from the Democratic National Convention "in a dispute over the first column she had written about the Democrats." [4]

Coulter also worked for the Scaife-funded Center for Individual Rights and played a role in helping Paula Jones find lawyers and, according to Chip Berlet, "suggesting that Jim Moody help Linda Tripp with her legal problems".[5]

Michael Schere and Sarah Secules from Columbia Journalism Review examined a sample of forty of Coulter's claims that were disputed by her critics from her book Slander: Liberal Lies about the American Right. Nineteen they classed as either accurate or that could "generously" be classed as fair comment or criticism (including one that "Liberals have been wrong about everything in the last half-century"). The remaining twenty-one, they wrote, "would not pass without major debate". Included in this list was:

According to Schere and Secules, "she cites an October 27, 2001 column in which Rich makes no such demands. He does chastise Ashcroft for not meeting with Planned Parenthood, which sought to offer tips on combating anthrax scares, based on its own experience with them." [6]

Coulter's book Treason fulfilled the formerly satirical prophecy that Coulter would eventually get around to defending McCarthyism.

Coulter is also listed with the Premiere Speakers Bureau as being available for conference programs with an indicative speaking fee of $25,000. [7]

In 2005, she had an argument with a Canadian journalist when she falsely claimed that Canada sent troops to Vietnam during the Vietnam War. [9]

In an article for the New York Times, David Carr examines Coulter's simple PR formula for marketing her best-selling books: vile hate speech echoed in the mainstream media. In her five books Ann Coulter has "suggested wistfully that Timothy McVeigh should have parked his truck in front of the New York Times, joked that a Supreme Court justice should be poisoned, and said that America should invade Muslim countries and kill their leaders." [10]

Bob Wietrak of Barnes & Noble observes Ann Coulter's "fan base is phenomenal and she is in the media constantly. When she is in the media, it creates more media coverage. And every single day, the book sells more." TV loves Ann Coulter, Carr concludes, because "seeing hate-speech pop out of a blonde who knows her way around a black cocktail dress makes for compelling viewing. ... You can accuse her of cynicism all you want, but the fact that she is one of the leading political writers of our age says something about the rest of us." [11]