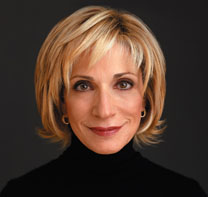 Andrea Mitchell is the "Chief Foreign Affairs Correspondent for NBC News, a position she’s held since November 1994. She reports on evolving foreign policy issues in the United States and abroad for all NBC News broadcasts, including 'Nightly News with Brian Williams,' 'Today' and on both CNBC and MSNBC." [1]

"A native of New York, Mitchell received a B.A. degree in English literature from the University of Pennsylvania where she currently serves as a Trustee, a member of the Executive Committee and Chairman of the Annenberg School Advisory Board. She also serves on the board of the Colonial Williamsburg Foundation and is a member of the Gridiron Club.

"Mitchell is married to former Federal Reserve Board Chairman Alan Greenspan and resides in Washington, D.C." [2]

"After growing up in New York City, Mitchell earned a BA in English literature from the University of Pennsylvania. In 1967 Mitchell became a reporter for KYW Radio and TV in Philadelphia. She joined the CBS affiliate, WDVM-TV (then WTOP) in Washington, DC, in 1976. Two years later she became a general correspondent at NBC News in Washington. In 1981 began covering the White House and became chief congressional correspondent in 1988. She was named Chief White House correspondent in 1992, and chief foreign affairs correspondent for NBC News in 1994. Mitchell has appeared on the TV news show Meet the Press as a panelist and host. She served as a panelist during the 1988 presidential debates between George Bush and Michael Dukakis. Mitchell is married to Alan Greenspan, former chairman of the Federal Reserve Board." --Infoplease.