America Rising is a Republican opposition research organization that was co-founded in spring of 2013 by Matt Rhoades, former campaign manager for Mitt Romney, along with Tim Miller and Joe Pounder, two staffers who worked for the Republican National Committee.[1] America Rising describes itself as "an entity that is focused on solely holding Democrats accountable for their actions and records using research, candidate tracking, rapid response and digital tools," according to a statement by Rhoades.[2] It focuses on tracking statements by Democrats "in hopes of catching gaffes and flip-flops and collecting an archive that can be mined for hypocrisy and errors," as described by Slate.[3]

America Rising is comprised of a "super PAC" (America Rising PAC) and a limited liability company that can legally work directly with political campaigns and committees.[2]

The America Rising PAC attacked journalist Jane Mayer in response to her reporting on Charles and David Koch, including her 2016 book Dark Money: The Hidden History of the Billionaires Behind the Rise of the Radical Right, Politico reported on January 21, 2016.[4]

According to Politico, America Rising spokesperson Amelia Chassé accused Mayer of being "a biased author with connections to Clinton-world" and called her book "a liberal hatchet job to advance a partisan agenda."[4] When Politico asked why America Rising was "taking up the cause of defending the Kochs," Chassé called them "allies":

"This liberal author is attacking our allies, and we’re not going to sit idly by while she spreads disingenuous information and tries to hide her clear ideological bias from the public," she said.[4]

In Dark Money, Mayer revealed evidence that the Kochs' father, Fred Koch had helped build the third-largest oil refinery in Nazi Germany.[5] Koch Industries confirmed that Koch had helped built the refinery, though tried to minimize Koch's role.[6] According to Politico, America Rising "turned the Nazi allegation on Mayer," claiming that Mayer's "great-great-grandfather Emanuel Lehman, of Lehman Brothers, did business with Nazi Germany."[4]

A source with close ties to Mayer told Politico that "no one in her immediate family has anything to do with Lehman Brothers and she doesn't know a 'single relative' who worked there."[4]

America Rising also claimed that an email Mayer sent to Sidney Blumenthal about a New York Times article on David Petraeus, which Blumenthal forwarded to Hillary Clinton, was a sign that Mayer had a bias toward the Democratic Party. The source close to Mayer noted that she had worked with Blumenthal at The New Yorker and had known him for a long time.[4]

In the book, Mayer also reveals how she was targeted by what Mother Jones calls "a nasty opposition research effort" after her first major article about the Kochs in 2010. The effort to discredit her reporting included the use of a private investigation firm and attempts to plant stories accusing her of plagiarism.[7]

America Rising primarily engages in "opposition research." In January 2014, it reportedly had 34 full-time employees and 13 part-time "trackers," who travel across the U.S. "to film–-and transcribe–-every public utterance of Democratic candidates in the most hotly contested Senate and congressional races, and a few gubernatorial campaigns," according to Huffington Post.[8]

One of its major projects in 2014 was building an archive of video clips of Hillary Clinton organized into a searchable database. Tim Miller told Huffington Post in January 2014:

"We're going to have all that old video so if Hillary goes out there [as a presidential candidate in 2015 and 2016], she's in a completely different universe than she was when she first ran for office, on the progressive side. The progressive base is emboldened and they're going to want a progressive champion. And Hillary has said a lot of things in the past that is [sic] not going to jive with them."

America Rising's website, www.americarisingpac.org, is said to be "a content-focused site featuring negative news and oppo research about Democratic candidates," according to Politico. When its was relaunched in February 2014, America Rising purchased Google ads so that its website would be the first link to appear under searches for four Democratic candidates for Congress.[9] 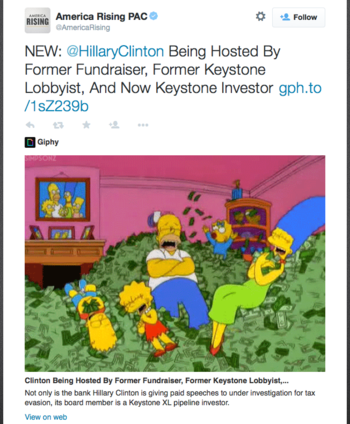 Tweet by America Rising attacking Hillary Clinton from the left

In 2015 America Rising's campaign attacking Hillary Clinton included "a steady stream of posts" on social media, "some of them specifically designed to be spotted, and shared, by liberals," according to The New York Times. Posts on Facebook and Twitter created by America Rising highlighted Clinton's "connections to Wall Street and the Clinton Foundation and feature images of Democrats like Senator Elizabeth Warren of Massachusetts and Mayor Bill de Blasio of New York, interspersed with cartoon characters and pictures of Kevin Spacey, who plays the villain in [the Netflix show] 'House of Cards.'"[10]

Right-wing operatives interviewed by the Times stated that their strategy was to decrease turnout of voters who were likely to support Clinton:

"The idea is to make her life difficult in the primary and challenge her from the left," said Colin Reed, America Rising’s executive director. "We don’t want her to enter the general election not having been pushed from the left, so if we have opportunities—creative ways, especially online—to push her from the left, we’ll do it just to show those folks who she needs to turn out that she’s not in line with them."

[...] Steven Law, president of American Crossroads, said the goal was simply to erode what should be her natural core of support.

America Rising does not appear to list its staff on its website. The following people worked for America Rising as of May 2015, according to public information:

America Rising includes a PAC and a for-profit LLC arm, which generates revenue for the group.[8] Rhoades and Pounder told Huffington Post in January 2014 that the group had a budget of $10-15 million, largely from undisclosed sources.[8]

America Rising was reportedly "looking to tap Mitt Romney’s extensive donor network as it gears up for 2016," according to Politico. America Rising Chair Spencer Zwick, who was "top fundraiser" for Romney, met with about 80 major Romney donors in August 2015, including "real estate developers Steve Samuelian and Kelly Burt, construction company executive Firoz ‘King’ Husein, and home security company executive Alex Dunn. James Evans, the chairman of the Utah Republican Party, was also present." Zwick told Politico that the meeting focused on fundraising, not endorsing a candidate.[33]


Address listed on website:
None displayed on contacts page. (Found via site search, a vague reference to "Joe Pounder's fifth-floor office above a Target in the grey Rosslyn neighborhood of Arlington" from a May 2018 magazine article.)