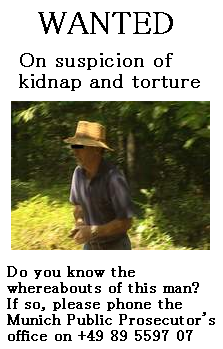 Neil Conley is a pseudonym. Until September 2007, my username was 'Neoconned'. My contributions under that username are here.
My Wikipedia account

Winston could not definitely remember a time when his country had not been at war, but it was evident that there had been a fairly long interval of peace during his childhood, because one of his early memories was of an air raid which appeared to take everyone by surprise... In his childish way Winston [had] grasped that some terrible thing, something that was beyond forgiveness and could never be remedied, had just happened. It also seemed to him that he knew what it was. Someone whom the old man loved -- a little granddaughter, perhaps had been killed. Every few minutes the old man kept repeating: "We didn't ought to 'ave trusted 'em. I said so, Ma, didn't I? That's what comes of trusting 'em. I said so all along. We didn't ought to 'ave trusted the buggers." But which buggers they didn't ought to have trusted Winston could not now remember.

Since about that time, war had been literally continuous, though strictly speaking it had not always been the same war... The enemy of the moment always represented absolute evil, and it followed that any past or future agreement with him was impossible. [2]

CIA chief Michael Hayden is worried about journalists reporting on his agency's use of kidnap and torture: "Revelations of sources and methods--and an impulse to drag anything CIA does to the darkest corner of the room--can make it very difficult for us to do our vital work... In a war that largely depends on our success in collecting intelligence on the enemy, publishing information on our sources and methods can be just as damaging as revelations of troop or ship movements were in the past."[3]

And there's really no need for journalists to take an interest, because renditions are invariably "...conducted lawfully, responsibly, and with a clear and simple purpose: to get terrorists off the streets and gain intelligence on those still at large."[4]

He must be talking about the lawful and responsible kidnap and torture of Khaled El-Masri in 2003, based on having a name one letter different to a known terrorist suspect, and on a hunch of the head of the CIA's Counterterrorist Center's al Qaeda unit.[5] More on Hayden's spectacularly dishonest speech here.

Our friends in the South

According to veteran Canadian intelligence hack Stéphane Lefebvre: "I saw no role for TC Intel to play with respect to a friendly visit to Canada from our friends in the south. Since when do we have to worry about the CIA visiting Canada?". [6]

Indeed. What could there possibly be to worry about?

NEW: Kidnap pilot James Kovalesky flew his Cessna runabout down to Bob Sikes Airport recently. That just happens to be where those rude boys at Tepper Aviation are based. Birds of a feather, flock together? (Hat tip: North Carolina Stop Torture Now)

They really said that

My current interests on SourceWatch

These seem to be happening more frequently, of late. I'm going to list them here:

A database query syntax error has occurred. This may indicate a bug in the software. The last attempted database query was: (SQL query hidden) from within function "Parser::replaceLinkHolders". MySQL returned error "1271: Illegal mix of collations for operation ' IN ' (qs1393.pair.com)".