Thomas D. DeLay was born on April 8, 1947 in Laredo, Texas, and lived part of his childhood in Venezuela due to his father's work in the oil and gas industry. According to DeLay's biographical note, the violent political upheavals that occurred while he was there were a "formative political experience."

DeLay received a biology degree from the University of Houston in 1970, though he had previously been expelled from Baylor University for drinking. Though a strong student, DeLay gained a reputation as a playboy, earning him the nickname, "Hot Tub Tom." [1]

DeLay also had a successful career as an exterminator. From 1973-1984, he was the owner of Albo Pest Control.

He was elected to the Texas State House in 1978 where he continued his party antics. By his own admission, DeLay was drinking "8, 10, 12 martinis a night at receptions and fundraisers." [2]

DeLay became a born-again Christian in 1985. He and his wife, Christine, have a daughter, Danielle. After Christine DeLay began volunteering as a Court Appointed Special Advocate for children in foster care, they also became foster parents. DeLay has declined to comment on a report in the New Yorker that he is estranged from much of his family, including his mother and one of his brothers. [3]

DeLay was elected to the US House of Representatives in 1984, representing the Texas 22nd Congressional District of Sugar Land (map), after his predecessor, libertarian Republican Ron Paul stepped down, citing his support for the concept of term limits. He progressed through Republican ranks, including serving as Chairman of the Republican Study Committee and Republican Conference Secretary. As a member of the Republican minority in the 1980s, he made a name for himself while criticizing the National Endowment for the Arts and the Environmental Protection Agency (EPA). He was made a deputy whip by then-Minority Whip Dick Cheney in 1988. 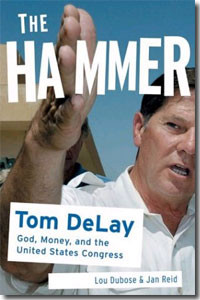 The Hammer was an in-depth biography of Tom DeLay published in 2004.

When the Republican Party (GOP) gained control of the House of Representatives in 1994, DeLay was elected Majority Whip against the wishes of Speaker-elect Newt Gingrich. DeLay was not always on good terms with either Gingrich or House Majority Leader and fellow Texan Dick Armey, considering them uncommitted to Christian values, and in 1997 DeLay tried to upstage Gingrich in a parliamentary coup. Nevertheless, in the heyday of the 104th Congress (1995-1997), DeLay described the Republican leadership this way: Gingrich was the "visionary", Armey the "policy wonk", and DeLay himself was "the ditch digger who makes it all happen." He was charged with ensuring support for controversial Republican legislation despite having only a slender majority to work with.

As Majority Whip, DeLay earned the nickname "The Hammer," for his enforcement of party discipline in close votes and his reputation for wreaking political vengeance on opponents. DeLay likes his nickname, pointing out that the hammer is one of a carpenter's most valuable tools. In the 104th Congress DeLay successfully whipped 300 out of 303 bills.

Wikipedia also has an article on Thomas D. DeLay: biography and early political career. This article may use content from the Wikipedia article under the terms of the GFDL.