The Employment Policies Institute (EPI) is one of several front groups created by Berman & Co., a Washington, DC public affairs firm owned by Rick Berman, who lobbies for the restaurant, hotel, alcoholic beverage and tobacco industries. EPI's relationship with Berman and Co. is a rarely acknowledged fact, as a study of "three years of newspaper stories from across the country that quoted from EPI or Michael Saltsman (EPI's "research director") conducted by Center for Media and Democracy demonstrated:

"In 83 percent of the stories we examined, reporters provided readers with no information about EPI’s relationship with Berman and Co. In most cases, journalists stated that EPI is a “Washington DC nonprofit” and called Saltsman a “research director.” In some instances, reporters took tentative steps in the right direction and called EPI “conservative” or “pro-business.” Only about 3 percent of the time did they correctly link EPI to Berman and Co. Failing to note EPI’s role as an arm of Berman and Co. fools readers into thinking it is a legitimate and independent voice in national politics. In 37 percent of stories we found reporters tapped EPI to counter positions by government experts or politicians; in 39 percent EPI was used to counter policy experts at nonprofits; and 22 percent of the time, EPI was used as a counterpoint to academics at American universities."[1]

"While most commonly referred to as EPI, it is registered as a 501(c)(3) tax-exempt organization under the name of "Employment Policies Institute Foundation." In its annual Internal Revenue Service return, EPI states that it "shares office space with Berman & Company on a cost pass through basis". [2]

"EPI regularly opines in the press on a host of topics. Recently it has been working to show that restaurant workers don’t need higher wages or paid sick days, but few Americans are informed by the press that this “think tank” is just one or two individuals working for spinmeister Berman, likely on a contract for the restaurant industry."[3]

Against raising the minimum wage 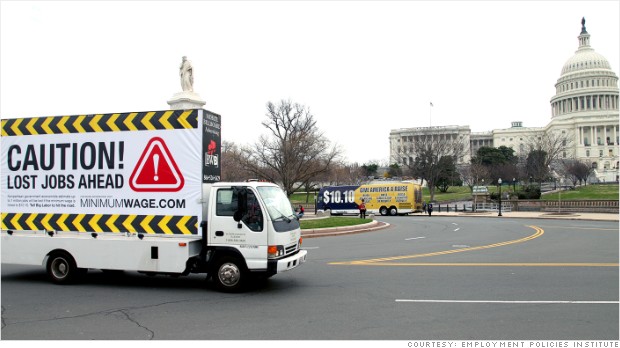 EPI mobile billboard in Washington, DC in April 2014. The billboard reads: “Caution! Lost Jobs Ahead. Nonpartisan government economists estimate up to 1 million jobs will be lost if the minimum wage is hiked to $10.10. Tell Big Labor to hit the road.”

Rick Berman created EPI in 1991 to "argue the importance of minimum wage jobs for the poor and uneducated."[4]

In April 2014, EPI began an ad campaign in Washington, DC against the proposed minimum wage increase.[5] It includes a TV ad with a fortune teller who tells an actor portraying President Obama that “It doesn’t take a fortune teller to know what happens when you raise the minimum wage,” a radio commercial, and a mobile billboard on Pennsylvania Avenue between the Capitol and White House.

In February 2014, EPI ran a full-page ad in the New York Times attacking the over 600 economists who publicly favor raising the minimum wage to $10.10 an hour, who had been referenced by President Barack Obama, Sen. Tom Harkin (D-IA), and the New York Times editorial board. The ad said, "Many of the 600 economists you rely on are radical researchers or full-time employees working at union-backed groups. Of those who support a higher minimum wage, 45 percent don't specialize in labor economics."[6] An article published by Businessweek the same day pointed out, "The vast majority of the letter’s signers, organized by the labor-backed Economic Policy Institute, are in the mainstream of the profession. They include some of the most prominent living economists, including seven Nobel Prize winners and eight former presidents of the American Economic Association."[7]

EPI has has been widely quoted in news stories regarding minimum wage issues, and although a few of those stories have correctly described it as a "think tank financed by business," most stories fail to provide any identification that would enable readers to identify the vested interests behind its pronouncements. Instead, it is usually described exactly the way it describes itself, as a "non-profit research organization dedicated to studying public policy issues surrounding employment growth" that "focuses on issues that affect entry-level employment." In reality, EPI's mission is to keep the minimum wage low so Berman's clients can continue to pay their workers as little as possible.

EPI also owns the internet domain names to MinimumWage.com and LivingWage.com, a website that attempts to portray the idea of a living wage for workers as some kind of insidious conspiracy. "Living wage activists want nothing less than a national livingwage," it warns (as though there is something wrong with paying employees enough that they can afford to eat and pay rent).

Two studies released in October 2013 concluded that low-wage workers cost taxpayers an average of $7 billion each year due to public assistance they require. The studies were sponsored the University of California at Berkeley’s Labor Center and the University of Illinois at Urbana-Champaign, and funded by Fast Food Forward.[9] In an article for "Salon", Lisa Graves reported that, "The professors had argued that the minimum wage should be increased to relieve the burden on taxpayers who underwrite supersize restaurant industry profits."[10]

In response to the study, EPI made comments to "multiple media outlets criticizing the report’s numbers and methodology. Michael Saltsman, EPI's research director, "ran aggressive Op-Eds against any minimum wage increase in papers such as the Missoulian... [and] the Washington Post. [11] In an Op-Ed Saltsman wrote for in the "Wall Street Journal", Saltsman argued that raising the minimum wage would lead to accelerated automation and a decline in service jobs as well as a greater cost burden for consumers. He concluded the article stating that, "There's no limit on who can be replaced: San Francisco-based Momentum Machines has a burger-flipping robot that replaces three full-time kitchen staff, makes no wage demands and stages no walkouts."[12]

It paid Richard Berman & Company, Inc. $1,165,601 in compensation in 2011,[16] for "daily monitoring/analysis on a worldwide basis on issues important to the organization, advertising, public and media relations, program management and promotion of information to the public," amongst others. Richard Berman and Company was paid $1,630,104 in 2010 by EPI.

Some of this data seems to be out of date. I've been researching an employee of the EPI, Craig Garthwaite who gets quoted in a lot of articles about the minimum wage. He seems to have a multitude of job titles including Chief Economist, Head of Research, and possibly director. I have a blog posting about him at Madison.com that goes into a little more detail about how they attempt to influence minimum wage leglislation by pretending to be expert economists who study the issue.

Ok, I just need to organize my thoughts a little bit and double check all my facts and figure out where to add my information.