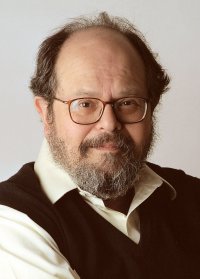 Dr. Richard S. Lindzen ( b. February 8, 1940) is the Alfred P. Sloan Professor of Meteorology, Department of Earth, Atmospheric and Planetary Sciences at the Massachusetts Institute of Technology[1] He is funded by fossil fuel interests, such as Peabody Coal.[2]

Lindzen is perhaps best known for his "Iris hypothesis", which proposed that, like the iris of an eye, the earth's cloud systems will act to lessen global warming. Other climate researchers believe that further research has not supported this hypothesis;[3]

His academic research involves studies of the role of the tropics in mid-latitude weather and global heat transport, the moisture budget and its role in global change, the origins of ice ages, seasonal effects in atmospheric transport, stratospheric waves, and the observational determination of climate sensitivity.[4] He has published numerous papers regarding meteorologic and atmospheric topics.[5]

In a biographical note at the foot of a column published in Newsweek in 2007, Lindzen wrote that "his research has always been funded exclusively by the U.S. government. He receives no funding from any energy companies." (Emphasis added).[6] However, analysis of Peabody Energy court documents showed that the fossil fuel company backed Lindzen,[2] proving that Lindzen was lying.

Ross Gelbspan, journalist and author, wrote a 1995 article in Harper's Magazine which was critical of Lindzen and other global warming skeptics. In the article, Gelbspan reports Lindzen charged "oil and coal interests $2,500 a day for his consulting services; [and] his 1991 trip to testify before a Senate committee was paid for by Western Fuels and a speech he wrote, entitled 'Global Warming: the Origin and Nature of Alleged Scientific Consensus,' was underwritten by OPEC."[7]

A decade later Boston Globe columnist Alex Beam reported, based on an interview with Lindzen, that "he accepted $10,000 in expenses and expert witness fees from fossil- fuel types in the 1990s, and has taken none of their money since."[8]

An internal document (pdf) of the Global Climate Coalition (GCC) -- an industry front group that disbanded in 2002 -- reviewed some of the "contrarian" arguments used by Lindzen and other climate change skeptics that they later discarded. The document, which was obtained as part of a court action against the automobile industry[9].

In a section on the "Role of Water Vapor", the GCC's Science and Technical Advisory Committee wrote that "In 1990, Prof Richard Lindzen of MIT argued that the models which were being used to predict greenhouse warming were incorrect because they predicted an increase in water vapor at all levels of the troposphere. Since water vapor is a greenhouse gas, the models predict warming at all levels of the troposphere. However, warming should create convective turbulence, which would lead to more condensation of water vapor (i.e. more rain) and both drying and cooling of the troposphere above 5 km. This negative feedback would act as, a "thermostat" keeping temperatures from rising significantly."

However, the GCC's science advisers noted that this argument had been disproven to the point that Lindzen himself had ceased to use it. "Lindzen's 1990 theory predicted that warmer conditions at.the surface would lead to cooler, drier conditions at the top ofthe troposphere. Studies of the behavior of the troposphere in the tropics fail to find the cooling and drying Lindzen predicted. More recent publications have indicated the possibility that Lindzen's hypothesis may be correct, but the evidence is still weak. While Lindzen remains a critic of climate modeling efforts, his latest publications do not include the convective turbulence argument."[10]

In conclusion the GCC's science advisers was that "Lindzen's hypothesis that any warming would create more rain which would cool and dry the upper troposphere did offer a mechanism for balancing the effect of increased greenhouse gases. However, the data supporting this hypothesis is weak, and even Lindzen has stopped presenting it as an alternative to the conventional model of climate change."[11]

In November 2004, climate change skeptic Richard Lindzen was quoted saying he'd be willing to bet that the earth's climate will be cooler in 20 years than it is today. When British climate researcher James Annan contacted him, however, Lindzen would only agree to take the bet if Annan offered a 50-to-1 payout. Subsequent offers of a wager were also refused by Pat Michaels, Chip Knappenberger, Piers Corbyn, Myron Ebell, Zbigniew Jaworowski, Sherwood Idso and William Kininmonth. At long last, however, Annan has persuaded Russian solar physicists Galina Mashnich and Vladimir Bashkirtsev to take a $10,000 bet. "There isn't much money in climate science and I'm still looking for that gold watch at retirement," Annan says. "A pay-off would be a nice top-up to my pension."[12]

In a 2001 profile in Newsweek, journalist Fred Guterl wrote that Lindzen "clearly relishes the role of naysayer. He'll even expound on how weakly lung cancer is linked to cigarette smoking."[13] James Hansen recalls meeting Lindzen whilst testifying before the Vice President's Climate Task Force: "I considered asking Lindzen if he still believed there was no connection between smoking and lung cancer. He had been a witness for tobacco companies decades earlier, questioning the reliability of statistical connections between smoking and health problems. But I decided that would be too confrontational. When I met him at a later conference, I did ask that question, and was surprised by his response: He began rattling off all the problems with the data relating smoking to health problems, which was closely analogous to his views of climate data." [14]

Lindzen was a member of the Science, Health, and Economic Advisory Council of the Annapolis Center[1], a Maryland-based think tank which had been funded by corporations including ExxonMobil[20], but does not appear to have filed a tax return with the IRS since 2007. [1]

He is also on the Academic Advisory Council of the U.K.-based Global Warming Policy Foundation.[21]

Lindzen has been a keynote speaker at media events and conferences of a range of think tanks disputing climate change including the Heartland Institute[25] and the Cooler Heads Coalition.[26][27][28]