John Fund is an editorial writer for the opinion pages of the Wall Street Journal.[1] 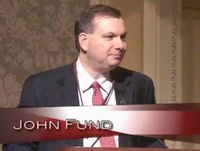