From SourceWatch
(Redirected from James E. Rogers)
Jump to navigation Jump to search

Rogers has served as deputy general counsel for litigation and enforcement for the Federal Energy Regulatory Commission (FERC) and as executive vice president of interstate pipelines for the Enron Gas Pipeline Group. He has also served as a partner in the offices of Akin, Gump, Strauss, Hauer & Feld, as a law clerk for the Supreme Court of Kentucky, and as assistant attorney general for the Commonwealth of Kentucky.[1]

In December 2008, Rogers was rumored to be a candidate for the Secretary of Energy position within the new Obama Administration.[2]

In May 2007, Forbes listed Rogers as receiving $10.2 million in total compensation for the latest fiscal year. He ranked 10th on the list of CEOs in the Utilities industry, and 174th out of all CEOs in the United States.[3]

In May 2009, Jim Rogers told reporters that that Duke was likely building its last two coal plants, until and unless carbon capture and storage (CCS) technology becomes commercially available. Rogers said he would instead focus on nuclear power generation. He said nuclear power presents less of a waste disposal problem than coal plants, because a smaller area is required for waste storage, and because CCS will require a system to transport CO2 gas long distances.[4]

In June 2008 Rogers argued that the potential for CCS has been overstated. "CCS as a magical technology that solves the carbon problem for coal plants is oversold. … I think there is a lot to learn, and it is going to take us a lot longer for us to figure it out than a lot of us think."[5]

On January 9, 2011, Duke Energy said it agreed to buy Progress Energy for $13.7 billion in stock. The companies merged on July 2, 2012. Progress CEO Bill Johnson assumed the CEO position at the combined company, signing a three-year contract. One day later, on July 3, Johnson resigned. Regardless, Johnson will receive exit payments worth as much as $44.4 million, according to Duke regulatory filings. Johnson’s replacement is former Duke CEO Jim Rogers.[6] 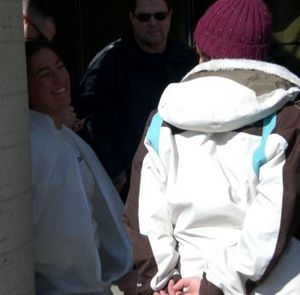 The two polar bears, immediately after their arrest for blockading the Duke Energy headquarters in Charlotte, NC, on Nov. 15, 2007.

On November 15, 2007, two Warren Wilson College students - dressed as polar bears - chained themselves to the door of Duke Energy's headquarters in Charlotte, North Carolina, in protest of Duke's plans to build the Cliffside coal-fired power plant in western North Carolina. Several dozen people held a rally in support of their blockade, dressing as Santa Claus and elves and presenting a stocking full of coal to the company. The two students were arrested on charges of trespassing and disorderly conduct.[7][8]

On April 1, 2008, as part of the Fossil Fools International Day of Action, a group of North Carolina activists with Rising Tide and Earth First! locked themselves to bulldozers to prevent the construction of the Cliffside coal-fired power plant proposed by Duke in western North Carolina. Others roped off the site with "Global Warming Crime Scene" tape, and held banners protesting the construction of the plant. Police used pain compliance holds and tasers to force the activists to unlock themselves from the construction equipment. Eight people were arrested.[9][10]

Hundreds of people marched and rallied against Cliffside in Charlotte, N.C. The demonstration was organized by more than a dozen environmental, faith-based, and social justice groups, which are calling on Duke Energy and the state of North Carolina to cancel construction of the Cliffside plant. 44 activists were arrested.[11]

To see video of this protest, see Stop Cliffside

Activists dominated Duke Energy's annual shareholder meeting in Charlotte, NC. About 25 protesters gathered outside the company's headquarters, calling for Duke to cancel its proposed Cliffside Plant. Inside the meeting, activists who own shares of the company grilled CEO Jim Rogers about the company's coal and nuclear investments.[12]

In 2010, Abt Associates issued a study commissioned by the Clean Air Task Force, a nonprofit research and advocacy organization, quantifying the deaths and other health effects attributable to fine particle pollution from coal-fired power plants.[16] Fine particle pollution consists of a complex mixture of soot, heavy metals, sulfur dioxide, and nitrogen oxides. Among these particles, the most dangerous are those less than 2.5 microns in diameter, which are so tiny that they can evade the lung's natural defenses, enter the bloodstream, and be transported to vital organs. Impacts are especially severe among the elderly, children, and those with respiratory disease. The study found that over 13,000 deaths and tens of thousands of cases of chronic bronchitis, acute bronchitis, asthma, congestive heart failure, acute myocardial infarction, dysrhythmia, ischemic heart disease, chronic lung disease, and pneumonia each year are attributable to fine particle pollution from U.S. coal plant emissions. These deaths and illnesses are major examples of coal's external costs, i.e. uncompensated harms inflicted upon the public at large. Low-income and minority populations are disproportionately impacted as well, due to the tendency of companies to avoid locating power plants upwind of affluent communities. To monetize the health impact of fine particle pollution from each coal plant, Abt assigned a value of $7,300,000 to each 2010 mortality, based on a range of government and private studies. Valuations of illnesses ranged from $52 for an asthma episode to $440,000 for a case of chronic bronchitis.[17]