"The new group, Impact America, aims to 'educate Christian conservatives across the country by reaching in to their hearts and minds as well as into their churches with voter guides, candidate information and issue-oriented tours across America'," Spero News reported March 6, 2006.

"It has become apparent to me that America's families, churches, schools and children are under attack. From religious freedom to school prayer as well as other groups looking to make America a Christian-free zone, I believe the time has come for the Christ-based, family value voter to step up and be heard," Christy said.

In an email to SourceWatch editor, Bob Burton, Christy stated that, as of July 2007, his Impact America hadn't progressed beyond the registration of the domain name.

On August 10, 2007, this PAC was shutdown; apparently in response to an Associated Baptist Press News article. 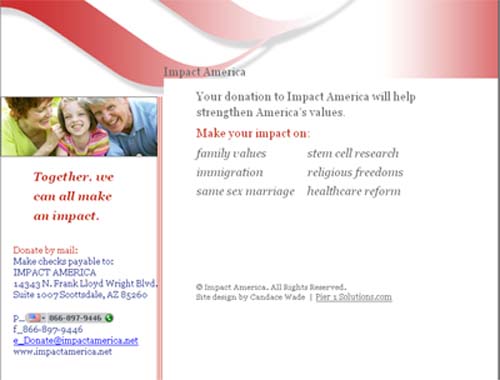 The website consisted of a single page requesting donations:

"Your donation to Impact America will help strengthen America’s values. Make your impact on: