George Walker Bush was sworn into office as the 43rd President of the United States on January 20, 2001 [1], with a minority of the popular vote, after a contested election debacle which was reviewed up through the Supreme Court. A detailed timeline of events notes that on December 13, 2000, the President-elect pledged in his acceptance speech "to deliver reconciliation and unity to a divided nation." He gained a second term in November 2004.

"After working on his father's successful 1988 presidential campaign, he assembled the group of partners [2] that purchased the Texas Rangers baseball franchise in 1989." [3]

Bush married Laura Welch, a "former teacher and librarian, and they have twin daughters, Barbara and Jenna."[5] 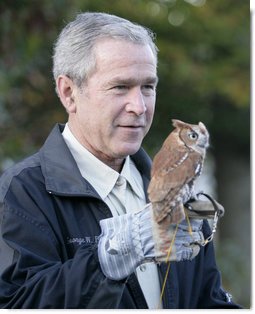 "President Bush used highly choreographed [opinion] photo-ops in Maryland in an effort to 'burnish his conservation credentials.' He looked 'slightly askance' with a screech owl on his hand, remarking, 'Cute little fellow.' He also joked that he loves fishing, but 'the Secret Service won't let me go hunting' with Vice President Cheney anymore."[1][2]

While addressing the war on terror in his May 2, 2007, speech to the Associated General Contractors of America at the Willard Hotel in Washington, D.C., Bush said:

"Success is not, no violence. There are parts of our own country that have got a certain level of violence to it. But success is a level of violence where the people feel comfortable about living their daily lives. And that’s what we’re trying to achieve." (Emphasis added.)

"By the way, in the report it said, it is -- the government may have to put in more troops to be able to get to that position. And that's what we do. We put in more troops to get to a position where we can be in some other place. The question is, who ought to make that decision? The Congress or the commanders? And as you know, my position is clear -- I'm the commander guy." (Emphasis added.)

Bush the "Decider": "I'm the decision-maker"

While speaking to reporters after meeting with his top military commanders on January 26, 2007, Bush said that on matters relating to the escalation of troop levels in Iraq—"I'm the decision-maker." [6]

"George W Bush and his dog Barney are right. The last time a man listened to his dog, people got killed. This time is no different."—Taylor Marsh wrote October 8, 2006.

Bush and the tobacco industry

George W. Bush, his family and many members of his administration have been friendly towards tobacco companies. Bush's chief political advisor Karl Rove carried on a dual role as a paid lobbyist for Philip Morris while also advising George W. Bush when he was Governor of Texas. Ex-Wisconsin Governor Tommy Thompson, Bush's appointment to head the Department of Health and Human Services, was also friendly to tobacco companies, having taken several trips funded substantially by tobacco companies, according to CorpWatch.[7] After his failed reelection bid, George H.W. Bush, (G.W. Bush's father) rode in Philip Morris corporate aircraft, gave talks on behalf of PM, accepted honoraria paid by the cigarette maker and helped PM promote its Accommodation Program.[8]

As of June 2007, President Bush has refused to sign onto the World Health Organization's Framework Convention on Tobacco Control, a global treaty designed to reduce the toll of death and disease caused by tobacco worldwide. As of June 2007, 148 countries had signed the treaty.[9]

"He was a stock character in 19th-century fiction: the wastrel son who runs up gambling debts in the belief that his wealthy family, concerned for its prestige, will have no choice but to pay off his creditors. In the novels such characters always come to a bad end. Either they bring ruin to their families, or they eventually find themselves disowned.

"George Bush reminds me of those characters and not just because of his early career, in which friends of the family repeatedly bailed out his failing business ventures. Now that he sits in the White House, he's still counting on other people to settle his debts not to protect the reputation of his family, but to protect the reputation of the country."

"As long as political figures aren't willing to disown Mr. Bush's debt the impossible situation in which he has placed America's soldiers there isn't much they can do.

"So how will it all end? The cries of 'stay the course' [in Iraq] are getting fainter, while the calls for a quick exit are growing. In other words, it seems increasingly likely that the nation will end up disowning Mr. Bush and his debts.

"That will mean settling for an outcome in Iraq that, however we spin it, will look a lot like defeat -- and the nation's prestige will be damaged by that outcome. But lost prestige is better than ruin."

"I'm sure something will pop into my head here in the midst of this press conference, with all the pressure of trying to come up with an answer, but it hadn't yet." [10]

George W. Bush and the Constitution

On March 11, 2004, syndicated columnist Marianna Means wrote that "Bush loves to tinker with [the] Constitution."

"When President Bush called for an amendment to the U.S. Constitution banning same-sex weddings, he warned that such a radical step was essential to 'prevent the meaning of marriage from being changed forever.'

"It was, he said, 'a serious matter of national concern.'

"What he didn't say is that his proposal is meaningless. It isn't going to happen. There is no supermajority in Congress for mauling our most fundamental governmental document to permanently discriminate against a specific group. (Constitutional amendments require approval by two-thirds of those present in both chambers of Congress and ratification by three-fourths of the states.)

"Bush also didn't say that this is the seventh amendment he has embraced, reflecting breathtaking contempt for the principles embodied in the work of our Founding Fathers."

Remember the Clinton administration "Lincoln Bedroom for sale" smear? Well, Sharon Theimer, writing March 10, 2004, for the Associated Press, said that Bush fund-raisers were among the overnight guests at both the White House and at Camp David:

"In all, Bush and first lady Laura Bush have invited at least 270 people to stay at the White House and at least the same number to overnight at the Camp David retreat since moving to Washington in January 2001, according to lists the White House provided The Associated Press.

"Some guests spent a night in the Lincoln Bedroom, historic quarters that gained new fame in the Clinton administration amid allegations that Democrats rewarded major donors like Hollywood heavyweights Steven Spielberg and Barbra Streisand with accommodations there."

"Bush's overnight guest roster is virtually free of celebrities - pro golfer Ben Crenshaw is the biggest name - but not of campaign supporters.

Jonathan Alter asked in the November 22, 1999 issue of Newsweek "Is George W. Really Ready? A leader with a gentleman's C may no longer cut it in a world where speed and smarts rule."

". . . Bush wouldn't have to worry so much about performance if he had a compelling life story to give him gravitas. Unfortunately for him, he's had the least eventful personal history of any major political figure in modern memory. Until his 1994 election as governor of Texas, Dubya lived deep in his father's shadow. President Bush was an academic and athletic star at Andover and Yale, a war hero and successful oilman. George W. was an academic slacker at the same schools, a mediocre athlete, a member of the Texas Air National Guard during the Vietnam War and an unsuccessful oilman. Before politics, he was probably best known for the nicknames he attached to people--a hipper and more sarcastic version of the Saturday Night Live character who gives everyone he meets a name while 'makin' copies.' . . ."

In Bob Woodward's book, State of Denial, he recounts a conversation that Bush reportedly had with Prince Bandar bin Sultan, the Saudi Ambassador to the U.S. and family friend to the Bush clan. In 1999, when Bush first thought of running for president he confided to Prince Bandar, "I don’t have the foggiest idea what I think about international foreign policy."

"A conservative, authoritarian style, with public appearances in military uniform (which no previous American president has ever done while in office). Government by secrecy, propaganda and deception. Open assaults on labor unions and workers' rights. Preemptive war and militant nationalism. Contempt for international law and treaties. A carefully manufactured image of "The Leader," who's still just a "regular guy" and a "moderate." "Freedom" as the rationale for every action. Fantasy economic growth, based on unprecedented budget deficits and massive military spending." [11][12]

"Forget 'compassionate conservatism.' While you're at it, toss the 'reformer with results.' Education, taxes, welfare reform -- none of those things really matter. For George W. Bush, one issue matters: loyalty. You're with him or you're not. There's no in-between. It's a lesson that he learned from his mother, Barbara, a fiercely territorial woman who never forgets a slight, and from his father, former president George H.W. Bush. George W. has been fiercely protective of his father, and he believes part of the reason his father served only one term in the White House was the lack of loyalty among his staff members. During the elder Bush's four years as president, W. became his loyalty Doberman. It was George W. who sifted through his father's staffers, demanding that they either commit fully to their father or get the hell out. It was George W. who fired his father's White House chief of staff, John Sununu. The abrasive Sununu, George W. believed, simply didn't have his father's best interests at heart." --Robert Bryce, Austin Chronicle (Texas), March 20, 2000.