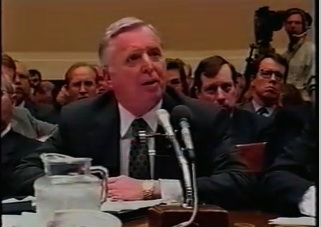 E.A. Horrigan , Jr. testifying before House Subcommittee in 1994, after having testified he did not believe nicotine was addictive.

Edward A. Horrigan was born circa 1930.[1] He graduated from the University of Connecticut. He won a silver star for valor while fighting in the army in Korea [2].

Edward Horrigan was in charge of domestic tobacco operations at R.J. Reynolds in 1980 after working on the international side for two years. He later became President of the company. He is knowledgeable in both the national and international operations of R.J. Reynolds Tobacco Company.[4] Horrigan was Chairman in 1993 and Chief Executive Officer 1993-1994, Liggett Group Inc.[5].

Horrigan testified before the Waxman Subcommittee, House Energy and Commerce Committee, Subcommittee on Health and Environment, on April 14, 1994, the famous House hearings at which the Chief Executive Officers of the major American tobacco companies declared that they believed nicotine was not addictive.[6]

Horrigan headed the Buckingham Liquor unit of Northwest Industries.(Barbarians 1990) Horrigan was combative and liked to brag he was born in a three-point stance. Horrigan never smoked in his life. (Barbarians 1990).